Surah Al Falaq And its Benefits

Surah Al Falaq whose first words are “Qul auzu bi rabbin Falak” is
the second-to-last one in the Quran; it is called Surah Falaq With only 5 verses,
it is one of the shortest surahs in the Quran
and therefore one of the easiest to memorize and recite.

Surah Al Falaq (The Daybreak) is the fifth phrase of the fifth paragraph of the
one hundred and thirteenth sura of the Muslim holy book, the Qur’an.
some Narrates refer to it as the “descent into Makkah,” Surah Falaq was revealed at Medina.
A quick prayer for protection from Satan’s evils is addressed to Allah in these five lines.
Together with the Surah  An-Nas that follows it,
they form what is known as Mu’awbiyatain (the two Surahs seeking refuge in Allah).
In times of sickness or just before sleep, it is customary to recite this Surah.

You May Also Like: 7 Prayers to Get Married Soon – The Most Effective Marriage Dua

It was recommended to individuals seeking refuge and
protection in Allah, far from Shaitan, as part of the Sunnah of Prophet Muhammad.
It was said by him before retiring to sleep. it is also said to protect against the evil eye.

Surah Falak In Arabic With Translation: 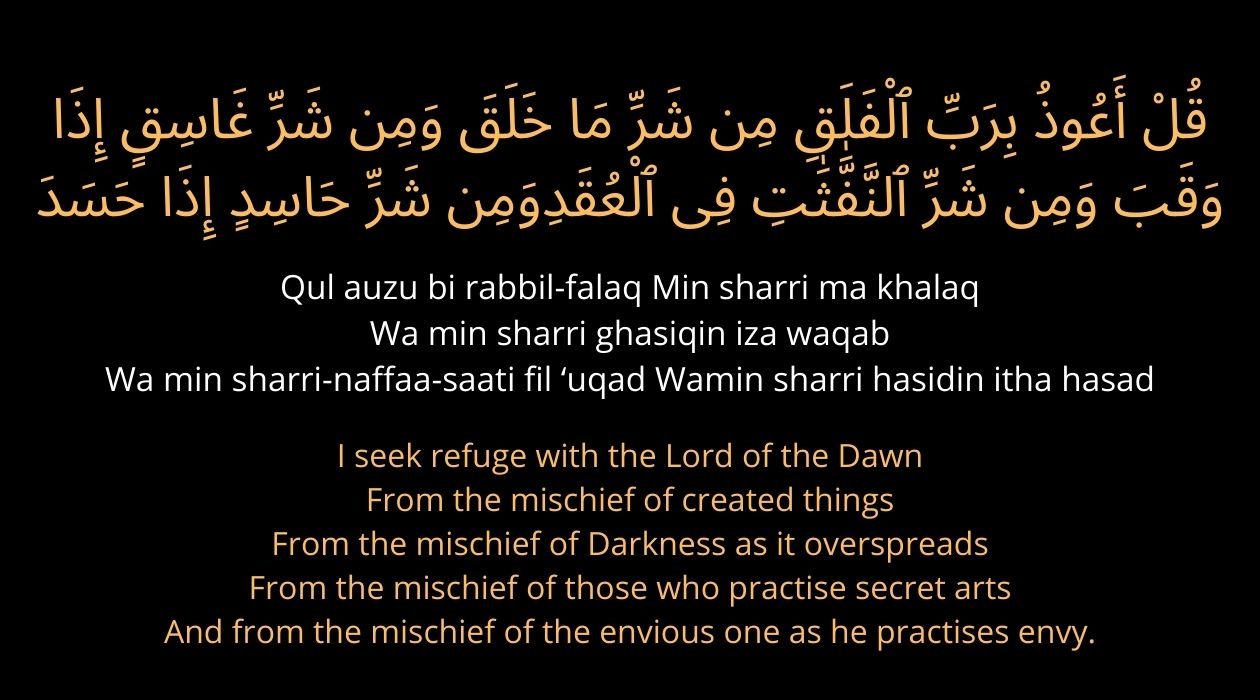 It has been revealed to me some Ayat the likes of which have never been seen before,
the Prophet declared. Continue with Qul A’udhu Birabbin-Nas and
Qul A’udhu Birabbil-Falaq till the end of the Surah.

Hadrat Abdullah Ibn Habib (R) says it was raining and very dark one night.
We went to find the Prophet (peace be upon him).
he asked me what was going on. I asked What should I say? He said: Surah Ekhlas and Qul Auzu.
If you read these three times each morning and night, you won’t have any problems. – (Mazhari)

In a long story told by Abu Dawood, Tirmidhi, and Nasai,
the Prophet said, “Whoever recites Surah Ekhlas, Falaq, and Nas in the morning
and afternoon is enough to save him from trouble.” – (Ibn Kathir)

You May Also Like: Surah Rahman: 7 Benefits and Importance

In a hadeeth related by Oqba ibn Amer in Sahih Muslim,
the Prophet (peace and blessings of Allaah be upon him) said:
“Have you observed that Allaah has brought down to me tonight a verse which has no equivalent?”
This refers to the verses Kul Auzu Birabbil Falak and Kul Auzu Birabbil Nas.
there is no other surah like it in the Torah, Injil, Psalms, or the Qur’an.

Abdullah bin Khubaib told me that the Messenger of Allah told him,
“Recite Surat Al-Ikhlas and Al- Mu’awwidhatain (Surat Al-Falaq and Surat An-Nas)
three times at dawn and dusk.”
It will be enough for you in every way.” [Abu Dawud and At-Tirmidhi].

Before the Prophet (peace be upon him) was on a journey,
he read Surah Falaq and Surah An-Nas to Oqba Ibn Amen (may Allah be pleased with him).
The Prophet also recited these two Surahs in the Maghrib prayer,
as well as when going to sleep and when getting out of bed at the conclusion of sleep.
In another one of the hadiths, Muhammad is reported to have given the directive
to recite two surahs after each prayer. (Abu Dawood, Nasai)