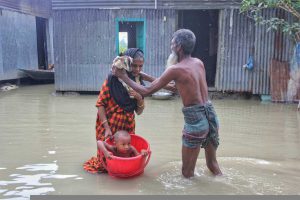 A British Muslim man has raised £20,000 in just two days to help with flood relief in Bangladesh,

where millions of people are stuck because of flooding

My uncle advised we help flood victims when the water rose.

I put up videos talking about how terrible the flood was and how bad things were.

A lot of people wouldn’t have cared if social media hadn’t shown what was going on.

In mid-May, the northern region of Bangladesh had its worst flood in the past eighteen years.

Less than a month later, a second deluge struck the nation. Flood Victims In Bangladesh

Homes and means of subsistence have been damaged as major rivers have reached unsafe levels.

Schools are being utilized as flood shelters, and movement has been halted, making it difficult for emergency responders.

An estimated 4,3 million individuals have been affected, resulting in a humanitarian crisis.

Even though Sarwar’s original goal was only £500, his posts went viral, and the GoFundMe campaign raised £20,000.

“When I first started, I set my aim at £500 because I knew it was a modest

endeavor and I didn’t anticipate that it would become viral.

This is my first big charity drive, and I’m happy with how British Bangladeshis have responded,” he said.

“I send money to Bangladesh, where a team buys food aid like rice, dahl, oil, spices,

and anything else needed to cook a hot meal and gives it to the poor and needy.

The water started rising three weeks ago, but it hasn’t gone down yet.”

You May Also Like: The Halal Food Festival Will Start In Manchester Next Month