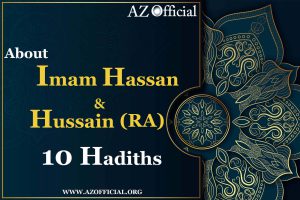 Hassan & Hussain,
the prophet’s grandsons (may Allah be pleased with them both),
were very special to him. In his collection of hadith,
Jami-At Tirmidhi, Imam At-Tirmidhi wrote down some stories about
how much the prophet loved his two grandsons. About Imam Hassan & Hussain10 Hadiths

Al-Bara narrated that I have seen (Prophet S.A.W) carrying
al-Hassan & Hussain son of ‘Ali on his arm and said,

Al-Hakim attributed this Hadith to Abu-Hurayra:
The Prophet did come out to us with al-Hasan and al-Husayn on his shoulders,
kissing them one after the other until he got to where we were standing.
A man questioned, “Oh Messenger of Allah almighty, do you love them?” He said,
“Yes, anyone who loves them loves me, and anyone who hates them hates me.”

Al-Khwarizmi Related A Hadith That Was Told
By The Prophet (S.A.W. )

“I am the scale of knowledge, ‘Ali is its pans, al-Hasan,
and al-Husayn are its strings, Fatima is its hook
and the imam of my community is its column in it the works of
those who love us and those who detest us are weighed.
Maqtal al-Husayn, written by al-Khawarizmy, Chapter 1 Page 107

During a question-and-answer session, the Prophet was asked

“Which member of your family has your strongest affection?”
“Al-Hasan and Al-Husain,”
he declared That’s what Fatimah’s father would tell her:
“Call my two sons for me.” And he’d hug and sniff them, too.

In the words of ‘Ali bin Abi Talib

Prophet (PBUH) grasped Hasan and Husain by the hand and said:
‘On the Day of Judgment, anyone who loves me as well as these two
and their parents will be with me on my level.” Hassan & Hussain

Abu Sa’eed mentions that the Prophet of Allah said

“Al-Hassan and Al-Hussain are Leaders of Paradise.”

Ibn ‘Umar stated I heard the Messenger of Allah say

It’s true that Al-Hasan and Al-Husain are my world’s two most fragrant blossoms.

In the narration of Abu Buraidah, He says

It was while the Messenger of Allah (PBUH)
was speaking to us that Al-Hasan and Al-Hasain, both in red shirts,
came and started walking and fell.
when he stepped down from the Minbar,
the Messenger of Allah picked up and
placed them in front of him. Hassan & Hussain
“Allah stated the Truth,” claimed he
referring to his wealth and children as a trial.
After seeing these two toddlers stumble and fall,
I couldn’t sit there any longer so I stopped my conversation from going pick them up.”

“Hussain is from me, and I’m also from Husain,”
The those who love Husain, may Allah love them. Hassan & Hussain

In the words of Abdullah Ibn Abbas

“The Prophet (SAW) was asked about the words that Adam
got from his Lord for which he was forgiven,
the Prophet said: “He asked Him, ‘By the right Mohammed, Fatima,
al-Hasan and al-Hussain have, that you forgive me.’.”