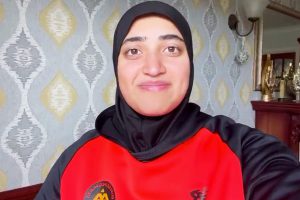 A beautiful mural was made in her honor at a Birmingham elementary school in the Small Heath neighborhood.

The beautiful piece of art was made to celebrate Maqsood’s signing with Birmingham Phoenix for another year.

It was made to encourage Muslim girls to take up sports.

Maqsood, who is 23 years old, told BBC that it was “unreal” to see his face on the wall.

Monday, the cricketer went to Marlborough Primary School, which has a lot of Muslim girls,

to view the mural painted by Lucy Daniell, a graffiti artist from Birmingham.

“When I was informed about the mural, I was surprised.

I was unaware of the magnitude of my impact “explained Maqsood.

with Pakistani roots to play international cricket for Scotland while proudly wearing a hijab.

Abtaha has a black belt in Taekwondo, which she earned when she was 11 years old.

She has also competed in the Scottish and British Taekwondo championships. Britain’s First Hijabi Cricketer