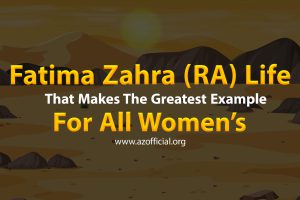 On the twentieth day of the Islamic month of Jumada Al-Thani,
Hazrat Fatima (RA) was born in Makkah (615 AD).
The last of Allah’s messengers, Prophet Muhammad (SAW),
is the father of Hazrat Fatima Zahra (RA).
The mother of Hazrat Fatima (RA) was a noblewoman by the
name of Khadijah bint Khuwaylid (RA),
a pious woman of unmatched virtues and merits who gave
all of her life and possessions to Islam.
Hazrat Fatima Zahra (RA) is the spouse of Imam Hassan (RA) and
Imam Hussain (RA), the leader of all believers and mother of Imam Hassan
and Imam Hussain (RA).

Hazrat Fatimah (RA) was separate from all other women because
she had high qualities and noble traits that put Her (RA) at the top of perfection and virtue.
Hazrat Fatimah (RA) showed the morals and way of thinking of her father.
She was a great example of faith, religion, chastity, cleanness,
helpful, & kindness to the poor and needy.

Charity To the Poor