Day Of Judgment In Islam (Qayamat) 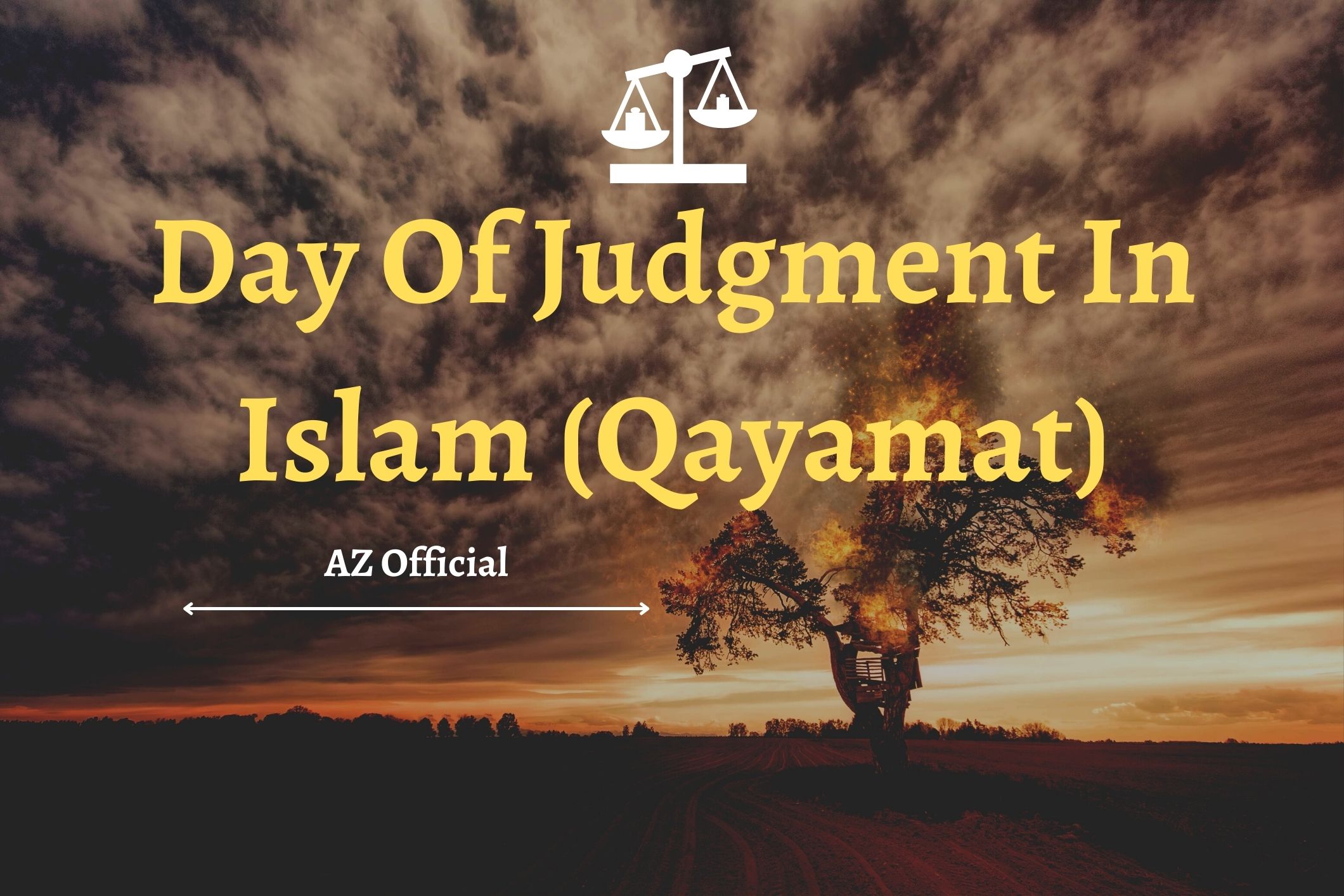 On the Day Of Judgment in Islam, everyone will be restored to their original appearance,
which is how they appeared when they were first born.
At some point in the future,
nothing that God created will be here on earth any longer.
Every person who has ever lived, from antiquity to the current day,
will one day be resurrected and held accountable for their actions.
This particular day is referred to as the “Day of Judgment.”

To Muslims, the Day of Judgment is a fundamental belief.
Everyone who has ever lived will give an account of their thoughts and deeds on that day.

On the Day when every soul will witness all the good and bad things they have done,
they will wish there was a long gap between them and their bad acts,
so says Allah Almighty in the Qur’an. But Allah cautions you to keep Him in mind.
Indeed, Allah is gracious to those who worship Him. (Al Imran 3:10)

Because of what Prophet Muhammad (peace be upon him) stated,
“Acts are nothing but intentions, and each individual will get what he meant,”
the foregoing verses demonstrate that Allah Almighty will hold us responsible for all we do,
and only He can be the true judge of our actions. Therefore,
if the movement of someone was for Allah and His Messenger,
then the migration of that person was for Allah and His Messenger.
And whose movement was for some worldly profit or to marry a woman,
then his migration was for what he migrated for
And whose migration was for what he migrated for. (Al-Bukhari)

“When the [final] earthquake shakes the earth and the earth gives up its burdens, man will say,
“What’s wrong with it?” – On that day, it will tell what it knows, because your Lord told it to.
On that day, people will leave in different groups to see how their actions turned out.
So, whoever does an atom’s weight of good will see it,
and whoever does an atom’s weight of evil will also see it. (Quran 99:1-8).
“In fact, your Lord will decide what they disagreed
about on the Day of Resurrection,” he said. (Quran 32:25).

The Day of Judgment is when all secrets shall be revealed. On that day,
everyone will be able to see the fulfillment of every prophecy in the Quran
and every story told by Allah’s Apostles and Prophets.

The Quran says about those who don’t believe:

Since they didn’t believe to begin with,
“even if one of them sought to buy himself off with all the gold in the world,”
it wouldn’t be accepted. In point of fact, people who don’t believe die while they don’t believe
. Those individuals are going to have to suffer a very terrible penalty,
and no one will come to their help ” (Quran 3:91).

Prophet Taught on The Day Of Judgment In Islam (Qayamat)

The Prophet taught that on the Day of Judgment,
individuals would first and foremost be held accountable for the prayers they had offered.
Allah will inform His angels “Behold the Prayers of My Servants,”
despite the fact that He is already aware of them.
Have they reached their destination or not?
It is expected that the final draught would accurately
represent whether or not all conditions have been satisfied.
In the event that they are lacking in any essential elements,
Allah will put you to the test by asking,
“Check to see if My Servant has Voluntary Prayers.”
If he has any voluntary prayers,
Allah would instruct the angels to use those prayers to compensate for the
the fact that he is not offering the required prayers.
The remainder of his activities will be judged in the same
a manner that the first one was. Abu Dawud, An-Nasa’i, and Ahmad)

Prophet Muhammad also told us about five
things that will be held against us:
Allah won’t let Adam’s son go until he answers five questions about how he lived his life,
how he spent his youth, how he made money, how he spent his money,
and what he did with his knowledge. (At-Tirmidhi)

During that day, every person will take stock of their lives, both good and bad,
and wish they could erase the negative ones from their memory.
And Allah forewarns you of Himself, and Allah is Merciful to those who serve Him. (Quran 3:30).

The contracts, agreements, and commitments we make in our life,
whether to God or to mankind, will also be scrutinized by Allah Almighty.
*And keep (all) the oaths. Verily! Inquiries shall be made into the covenant (Al-Israa’ 17:34).

Justice In The Court Of Allah

Allah will also question us about what we listen to, watch,
and think about on the Day of Judgment. According to the Qur’an,
“Verily! Allah will ask you questions concerning your hearing, your eyesight,
and your heart (Al-Isra’ 17:36),
and then you will be asked about the joys you experienced in this world on that day” (At-Takathur 102:8)

Allah will look at each person’s life and deeds,
make sure they are clear, judge them, and give verdicts.
And those who were holy and good people in Allah’s eyes will go to Paradise,
while those who did nothing but cause trouble and were bad people will go to Hell.

Hadith On The Day Of Judgment In Islam (Qayamat) 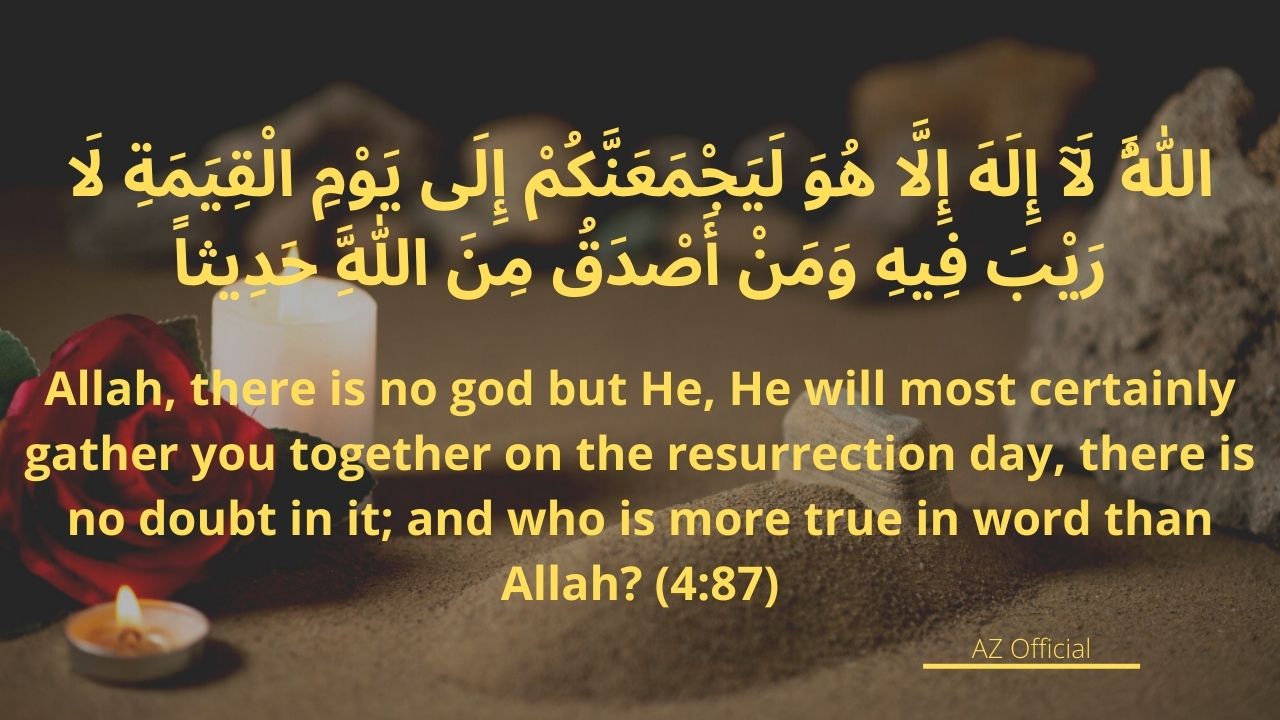 On the day of the resurrection,
We will make sure that the scales of justice are balanced
so that no soul will be treated unfairly.
And if the weight of a mustard seed can be determined,
We will do so. And it is plenty for us because we are accountants.” (Quran 21:47).
In the Quran,
Allah commands us to “dread the Day when you shall be restored to Allah.” Then,
everyone will receive their just rewards,
and there won’t be any unfair treatment. (Quran 2:281).

On the Day of Judgment, Allah will talk to everyone directly, without a translator,
as Prophet Muhammad explained. When the person looks to his right,
he will only see his own actions. Then, when the person looks in front of him,
he will see nothing but Hellfire. So, even if you only have half a date to give,
you can protect yourself from Hellfire. (Al-Bukhari)

Day Of Judgment In Islam (Qayamat)

The Prophet also said that when Allah meets someone,
He will ask, “O person, wasn’t I kind to you? And didn’t I give you a wife
and put the horses and camels at your disposal?” “Yes!”
will come back from the servant. Then Allah will ask,
Did you think that you’d Saw Me? He’ll answer, No Allah will say,
I’ll forget you just like you forgot Me.

God, the Supreme,
will react the same way to a second human being as he did to the first.
Then He will meet a third individual and pose identical questions to them;
“O Lord, I believed in You, in Your books, and in Your messengers. I prayed, fasted,
and contributed to a good cause. And he’ll sing Allah’s praises from the rooftops.
To back up your claims, wait for Allah to send witnesses.
Who is going to testify against me? someone will have an internal monologue.
After his mouth has been gagged, the rest of him, including his thighs, flesh,
and bones, will be interrogated. As they do so,
they will discuss his many transgressions. Finally,
he will understand that he has no basis for his actions.
Allah Almighty is going to have a fit over that hypocrite. (Muslim)