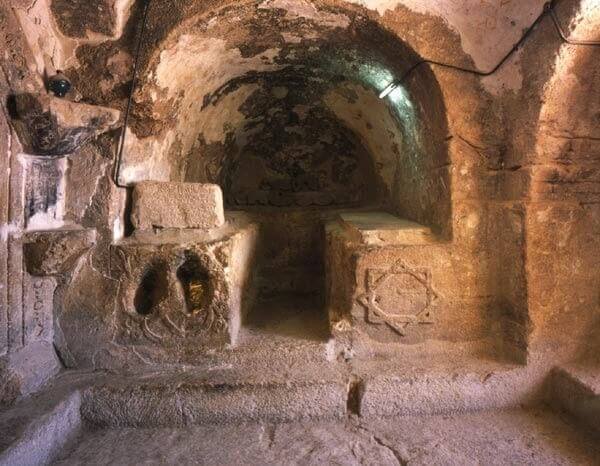 The image on top depicts an area of the Achebe-Kahf cave’s interior.

The carved stone blocks are graves, with one in each of them (on the left)

having a viewing hole through that bones are viewed. The dog’s bones have

conjointly been on the show. The Quraysh of Makkah, who did not trust in the

Prophet’s message challenged him to answer three questions posed by the Jews.

“Who was the youth who vanished, and how many were there?” was one of the inquiries.

was a prophet. The Prophet ( ) had no idea and said he would respond tomorrow,

waiting for the solution to be revealed to him by Jibraeel ( ), but he forgot to mention ‘Inshallah’ (if Allah wills).

For 15 days, the Prophet ( ) received no revelation, forcing the Quraysh to harshly criticize and revile him.

The explanation, however, was revealed to the Prophet ( ) in a Surah named after the sleepers’ cave (Al-Kahf).

The Quran disclosed the same story that the Jews were aware of, and it answered the queries in a manner

that was consistent with their knowledge. The Jews knew they slept for 309 years because the Quran affirmed it.

The Quran, on the other hand, did not specify how many there were. “[Some] say, ‘The sleepers were three, and

and their dog made eight,’ guessing in the dark.” ‘My Lord knows best how

many they were,’ said [Prophet]. Only a few people truly understand them,

so don’t fight; instead, stick to what’s obvious and don’t question any of these people

about them. The Jews themselves had no idea how many there were (whether 3,5 or 7)

and were astounded when the Quran revealed every possible number

for the number of sleepers.

You May Also Like: Saudi Arabia Launches New Initiative To Touch Black Stone At The Holy Mosque