Together with the other pillars, it makes up the circle of faith in the life of a Muslim.
The main difference between a Muslim and a non-Muslim is whether or not they accept Tauheed.

What Signifies The Fourth Kalima (Tauheed)?

The fourth kalima is referred to as Tauheed or Tawheed, and it literally translates to “unification of God’s oneness.” This is the first of the five pillars, which summarise the fundamental tenets of Islam. It asserts that there is only one God and that his name is Allah (Al-Ahad) (Al-Wahid).

One of the gravest sins described in the Qur’an is known as shirk,  which can be summed up
as the acceptance of other gods or deities in addition to Allah. According to the Qur’an, committing the grave sin of shirk is an offense that cannot be forgiven.

In the Quran, Surah Ikhlas, which is a good place to start learning about Tauheed, describes the Oneness of Allah.

After discussing the significance of the fourth Kalima, let’s move on to discovering what it is. Except for Allah, there is no one deserving of worship. He has no partner and is alone.
The Kingdom belongs to Him, and He is worthy of all glory. He brings about both life and death.
Everything is in His control, and He has authority over everything.

Its meaning is “unification of Allah SWT’s oneness.” It emphasizes that only Allah is deserving of worship. It represents the monotheism that is the core of Islam and is the first pillar of Islam.
It symbolizes our faith. We only worship Allah and turn to Him for assistance. This conviction clearly distinguishes Muslims from non-Muslims.

Shirk is identifying partners with Allah. In Islam, engaging in shirk is a serious sin that Allah SWT will not pardon.

In Arabic, the fourth Kalma Touheed is: 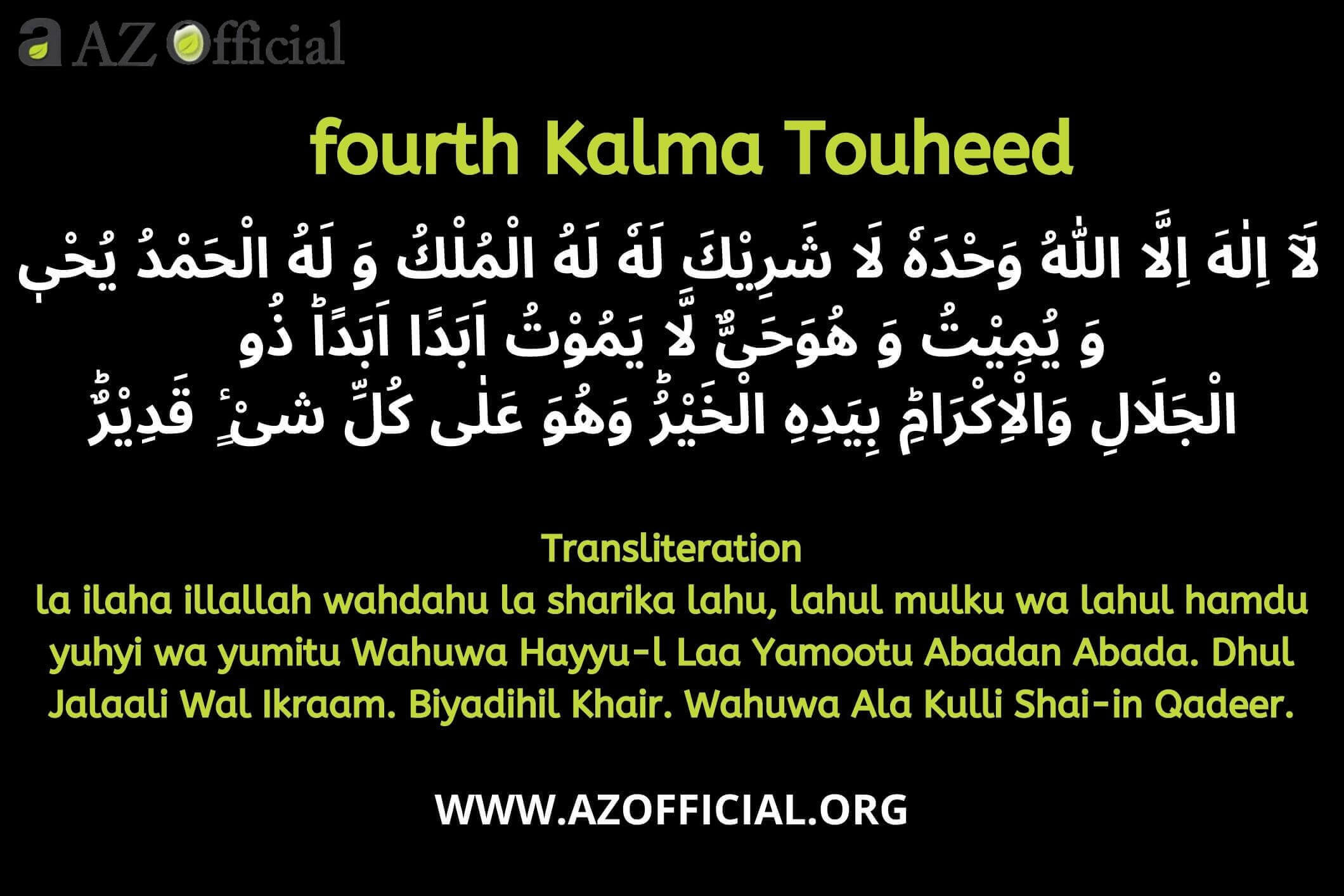 Parts Of The Fourth Kalima

The three parts of the fourth
Kalima can also be seen this way:

1. The first is to have faith in Allah SWT. He alone is the ilaah.
Worship should only be given to Him SWT.

2. He is the only one who deserves praise.

3. He is the most powerful, and He owns both this world and the next.
It sends a very clear message that even a Muslim’s success in the Dunya depends on how much he or she submits to Allah SWT. He gives the Dunya easily to those who don’t believe.
But a believer won’t be successful until they get their actions and life in Dunya in line with Islam.
And, of course, this is also important for the life and success of akhirah. Here, a lot of Muslims get confused and put the success of this world and the success of the next world on different levels.

First of all, neither the Quran nor the Hadith contains all six kalima.
They are authorized forms of prayer (dhikr) that can be offered. Their primary objective appears to be education, especially for young Muslims or those who have recently converted to Islam, as they provide a solid foundation for understanding Islam.

Also Like: 3rd Kalma And Its Benefits(Opens in a new browser tab)