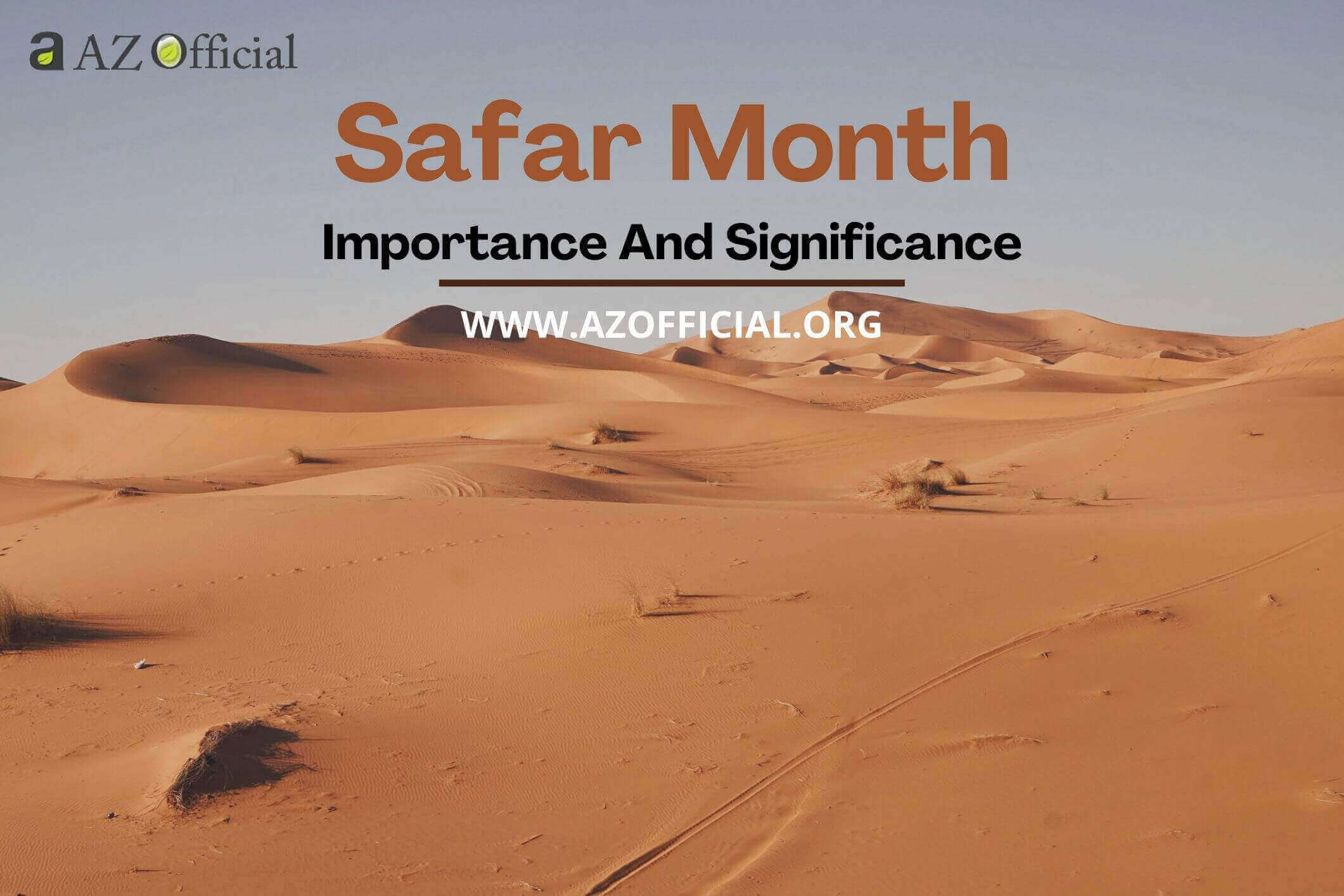 Every Islamic month is unquestionably very significant.
But for a variety of reasons, the month of Safar is frequently misinterpreted.
Muslims hold the view that there is only one powerful God.
The most significant month in Islam should
undoubtedly be free of any indications and misconceptions
so that people can comprehend it better.

Safar has a linguistic meaning of “empty.”
Therefore, according to scholars, the month is called Safar because:

When it first occurred, it was termed because Makkah had
little supplies and it was winter. As a result, when pilgrims and Makkah
residents walked outside to obtain food, their homes were “empty.”
The Makkans would embark on expeditions that would leave their
opponents’ homes “empty” after the holy month of Muharram.

Since we use a lunar calendar, many Islamic months are
named after meteorological phenomena that do not correspond to the actual month.

For instance, Rabi al-Awwal, which translates to “the first spring,”
can occur during any of the seasons because it is based
on the moon’s phases rather than the earth’s position in relation to the sun.

Similarly, Safar is no longer always in the winter or a season
for gathering food; these were just its historical connotations.

Prior to the arrival of Islam, Arabs referred to “the two Safars” as “Safaran.”
They made the link between Safar and Muharram.
Safar was once associated with pilgrimage,
just as Muharram was a holy month and the time
when pilgrims returned home after Hajj.

Muharram was designated by the Prophet (SAW) to be
“the sacred month of Allah,” but Safar was thought to be a distinct month

Safar, then, is not one of the four holy months and has nothing to do with the Hajj.

The people (of the pre-Islamic time) once believed that performing
Umrah during the Hajj months was one of the greatest sins on earth,
according to Ibn Abbas (RA). They also used to view the month of Safar as a forbidden
(i.e. sacred) month, and they would remark
, “Umrah is permitted for anyone who desires to perform it after the
wounds of the camel’s back heal up and the signs
of those wounds fade, after they return from Hajj.”

On the morning of the 4th of Dhul-Hijjah,
the Prophet (SAW) and his companions arrived in Makkah in Ihram for Hajj.
He told his companions to only use Ihram for Umrah,
and they did (instead of Hajj). So, they thought his order was
something big and were confused. They told him,
“O Prophet of Allah (saw)! What kinds of ways are allowed to end Ihram?
” The Prophet (saw) told them,
“Finish Ihram like a non-Muhrim.
You can do everything.” [Bukhari]

In another story, Ibn Abbas (RA) said,
“Then, on the morning of the 4th of Dhul-Hijjah,
the Prophet and his companions came while reciting the Talbiyah for Hajj.
He told them to make it “Umrah,” but that was too hard for them to do.
They asked, “O Muhammad, to what extent
should we leave Ihram?” He replied, “Fully.” [Nasa’i]

The above hadith shows that the Prophet (SAW)
not only reminded the Sahabah (RA) of the original months that Allah (SWT)
had made but also made sure that they
stopped doing things that were not from Islam.

For instance, they didn’t want to do ‘Umrah during the sacred months,
which they thought included Safar,
because they thought that those months were only for Hajj.
But the Prophet (saw) did Umrah with them in the month
of Dhul-Hijjah to show them that what they were doing was okay.
He also said that Safar was not a holy month.

All Of History Happened In The Month Of Safar

The second lunar month of Islam is linked
to a lot of important religious events.
Safar Month: Importance And Significance

They chastised the loving Imam Hussain’s family after this barbarism.
After a torturous 16-day journey,
they finally presented the family to Yazeed.
This assembly in Yazeeds Palace, Syria,
is linked to a number of significant occurrences, statements, and unfair treatment.
It’s unquestionably the most memorable historical event in Islam’s history.”
Safar Month: Importance And Significance

Unquestionably, the Holy Prophet held each and every Karbala
martyrdom in the utmost reverence (P.B.U. H).
The young and adored daughter of Imam Hussain was Sakina Bint Husayn (R. A).
Sakina Bint Husayn’s story is incredibly distressing.

First of all, Sakina was very close and dear to her father and the rest of the family.
He observed Yazeed’s soldiers killing his entire family,
including his brother, father, and uncle after she had been thirsty for several days.
After the passing of her mother’s adored son Ali Akbar,
Hazrat Sakina, who had through a great deal of suffering,
comforted her mother. When she was four years old,
Sakina passed away in the Yazid palace hall while she sobbed over her father’s body.

Migration (Hijrah) From Mecca To Medina On The 27th Of Safar.

Islam is a peaceful and loving religion.
There were far too many evils and crimes in society prior to Islam,

particularly against women. Arabs were accustomed to worshipping idols.
Hazrat Muhammad (PBUH) spread Allah’s message, but non-Muslims turned against Islam. They began to erect obstacles for Muslims, as well as various types of hardships and difficulties.

Allah commanded Muslims to relocate to Madina. It was undoubtedly difficult for Muslims to leave their homes and cities. Furthermore, Muslims migrate from Mecca to Medina in the month of Safar for the sake of Islam.

The residents of Medina greet Hazrat Muhammad (PBUH) and His Companions. Muslims proliferate rapidly in Medina, and the historical event of the Conquest of Makkah occurs within a few years.

Importantly, this is unique marriage because this devout couple
has made significant contributions to Islam.
In the future, Hazrat Ali (R. A) becomes the Muslims’ fourth caliph.
Hazrat Hassan (R. A) was the fifth Caliph,
and Hazrat Imam Hussain and his 72 companions were martyred for the sake of Islam.

Unfortunately, the majority of safety-related events are negative.
Some people began to believe in superstitious
and unnecessary beliefs about this month.

Unnecessary Some Muslims, due to a lack of proper education,
believe that they will suffer financial and business losses in Safar.
However, according to Islam, only Allah has all power.

In short, the 2nd month of the Lunar calendar has been associated
with certain omens. Safar, like the other months,
is an important religious month in Islam,
but there are some other sacred religious months.
As Muslims, we believe that Allah has all power and that
we should not believe in such superstitions.
Safar Month: Importance And Significance

Also Like: Is It Possible To Marry In Safar or Muharram?