Miracles In Quran (With Quranic Verses) 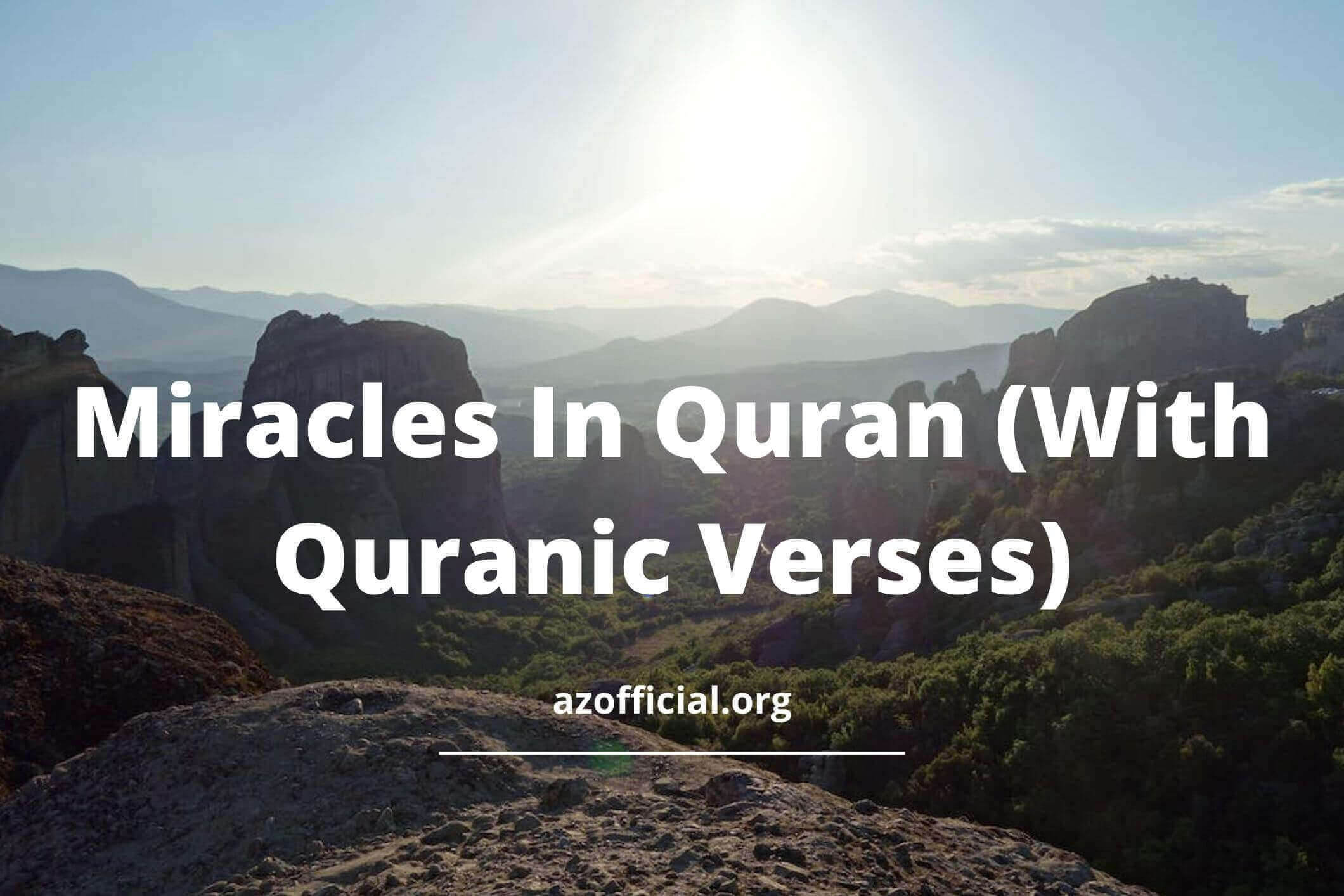 Reflecting on Allah’s creation and the world around us is a commandment from Allah.
The only ones who can understand His Ayah, He explains, are the people of understanding.
It is recommended that we go beyond a surface reading of the Quran and seek out the meanings of its verses.
If we knew how to speak the language of the Quran, we could experience the joy of this book and learn about its wonders.

1- A Protective Covering Of Sky:

Before the 20th century, researchers had no idea that the sky served as a ceiling of safety. 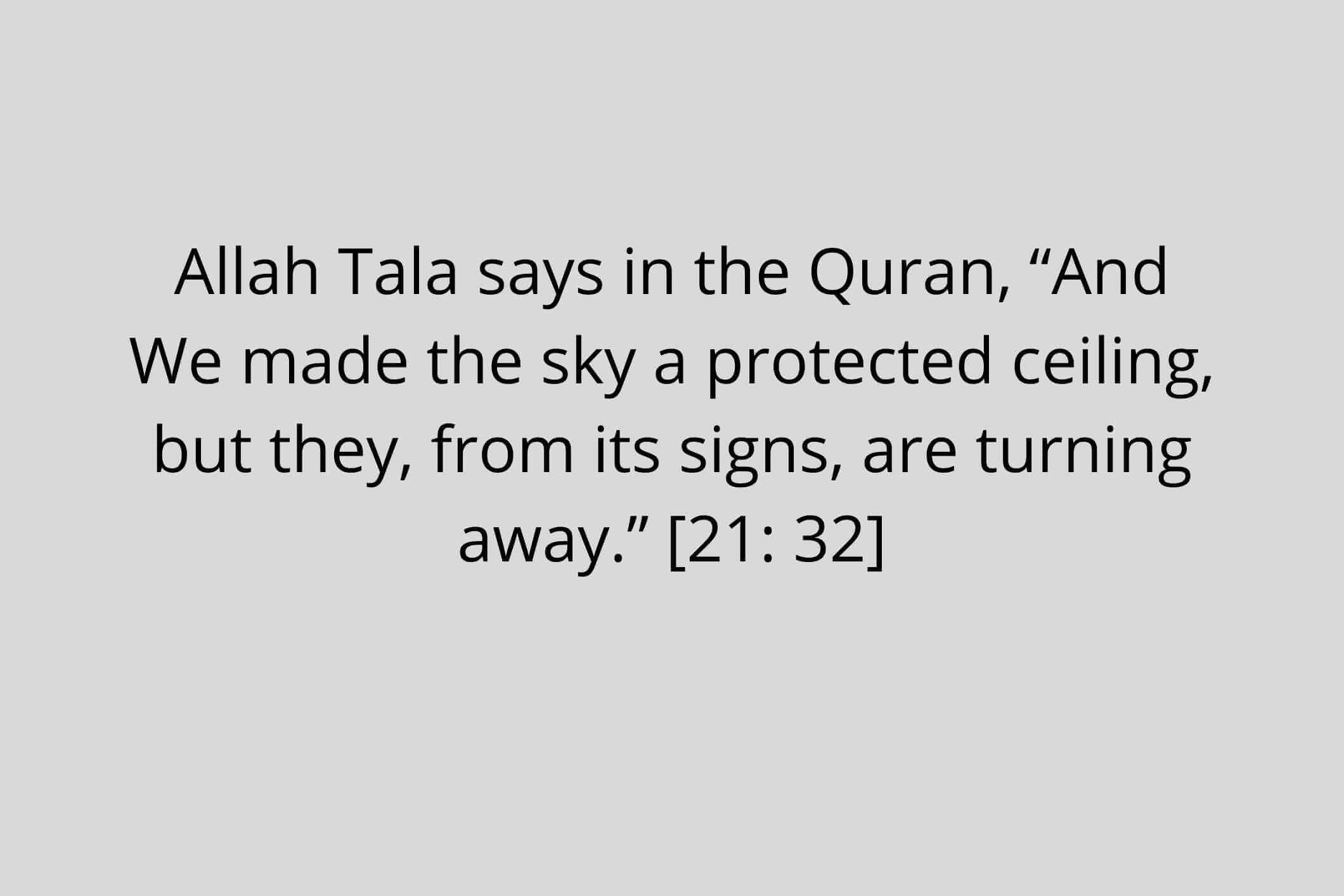 The sky is stunning to behold, but it’s also crucial to our survival.
The Sun emits energy at various wavelengths, with the shorter ones carrying the greatest risk.
However, some of this energy is essential for vital processes like photosynthesis in plants and vitamin D generation in humans.
Allaah Tala fashioned a system to filter off any harmful radiation before it reached Earth.
The ‘ozone layer’ describes this mechanism. In the year 1913, researchers found this stratum.
The above is only part of the story. The ambient air around us keeps a comfortable temperature.
Without it, the temperature will drop to -270 degrees Celsius, and we will all perish of hypothermia.

The sky serves as a safety net, preventing us from being hit by falling stars and planets.
What would have happened if Allah ( ) hadn’t ordered the stars and the sun to remain where they are?
Everyday living would have been a nightmare, and things would be constantly falling on top of us. 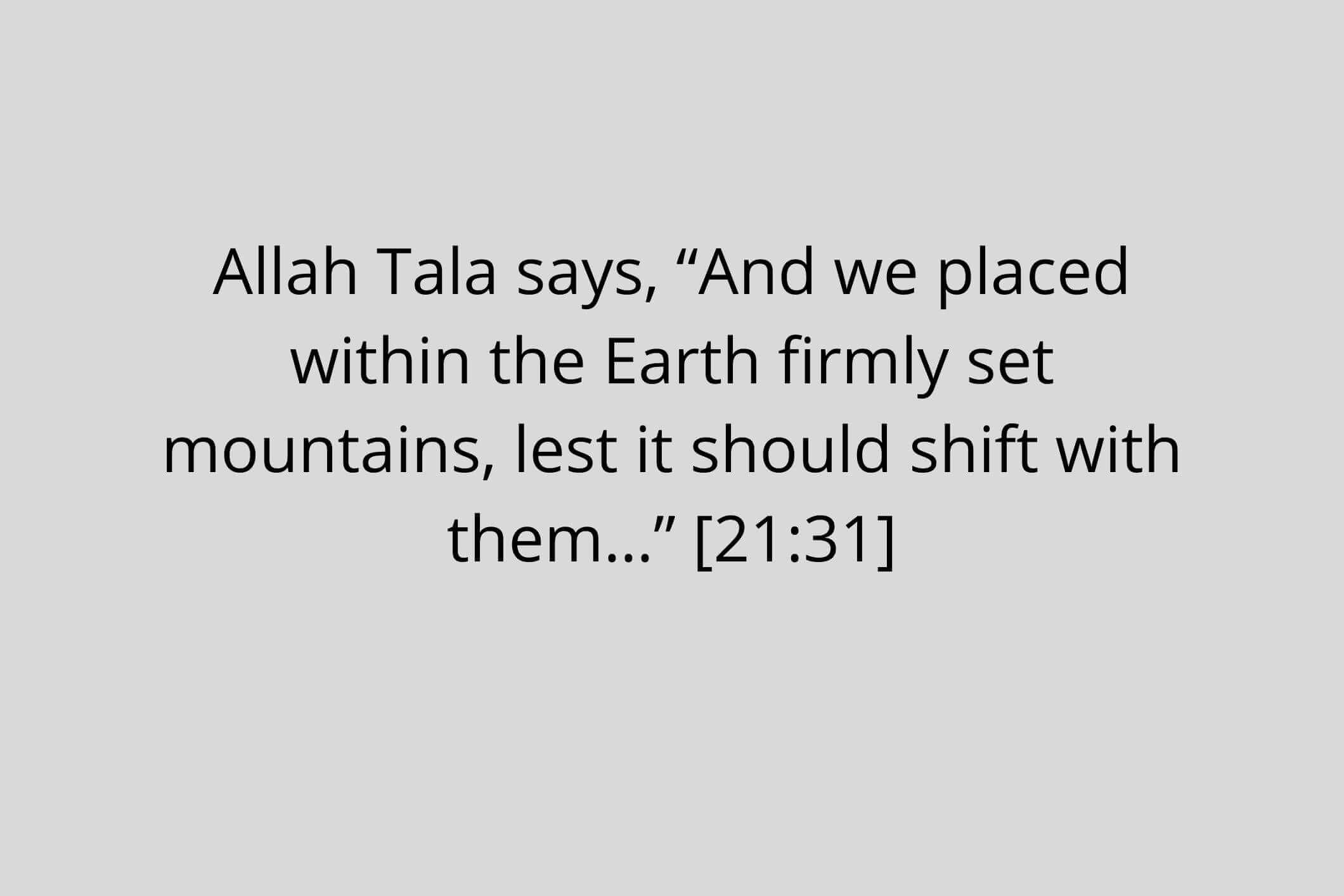 Our planet, Earth, is in perpetual motion. Allah hid its effects from us by positioning enormous mountains in its path.
It wasn’t until geologists dug deep into the earth that we learned mountains have such deep foundations.
The Earth is held in place by these roots, which grip the various tectonic plates like a peg or an anchor.
In light of the miraculous events described in the Quran, we learn to respect Allah’s
creative abilities and give thanks for all that He has done to ensure our survival.
If there weren’t any mountains, how would we have managed to walk on a planet that was continuously shifting?
Inquire of those who have experienced aftershocks and tremors caused by earthquakes. Anxiety is always present.

3- Coming Down Of Rain In Decided Proportion:

What causes some days to have light rain and others to have a deluge?
We might like to imagine that things happen by coincidence,
yet Allah tells us that everything that does occur is predetermined by Him. 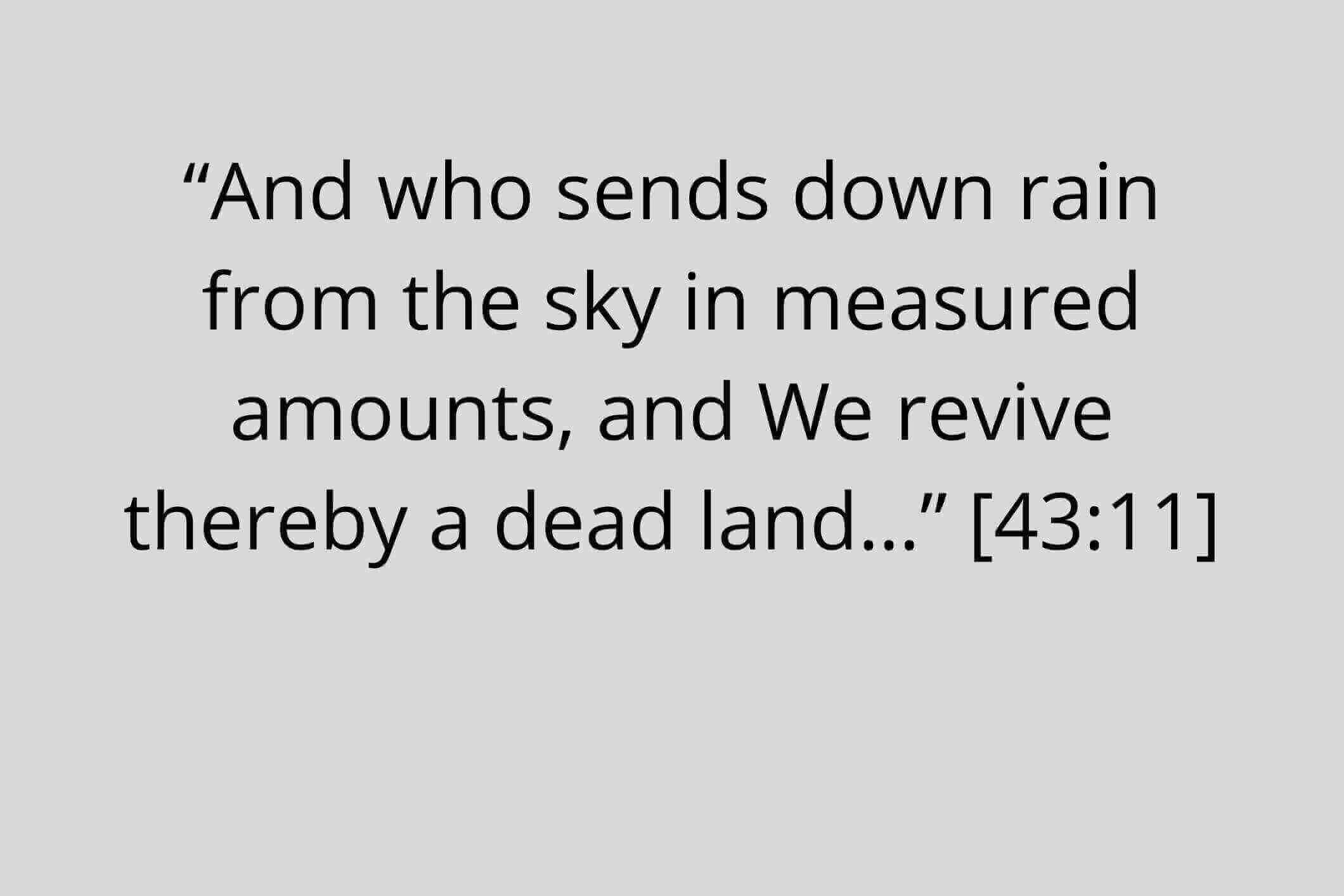 The Earth loses 16 million tonnes of water to evaporation every second,
and the same amount must be replenished by rainfall.
Allah uses the hydrologic cycle to preserve this delicate equilibrium.
A change of even a few percent can have a profound effect on the environment.
The rate at which it rains is likewise completely at Allah’s discretion.
A storm moves much more quickly than a drizzle, and the difference is noticeable.
Heavy downpours cause harm and cost lives and possessions.
Light rain has little effect on anything.
The Prophet instructed us to pray to Allah for rain because of this.

A French hydraulics engineer named Bernard Palissy
made the discovery of the water cycle in the 16th century.
Rainfall rate is directly proportional to raindrop size,
a relationship discovered by a German physicist named Philipp Lenard in the 19th century.

Our cosmos, according to Einstein’s equations, is expanding. This finding caught everyone off guard.
After the Big Bang, for many years, scientists believed the cosmos slowed slowly after its first explosion.
But they were totally wrong. Recently, the expansion of the cosmos has accelerated.
Dark energy is the force behind this unexplained regrowth.
This unexplained anti-gravity started expanding the universe again some five billion years ago. 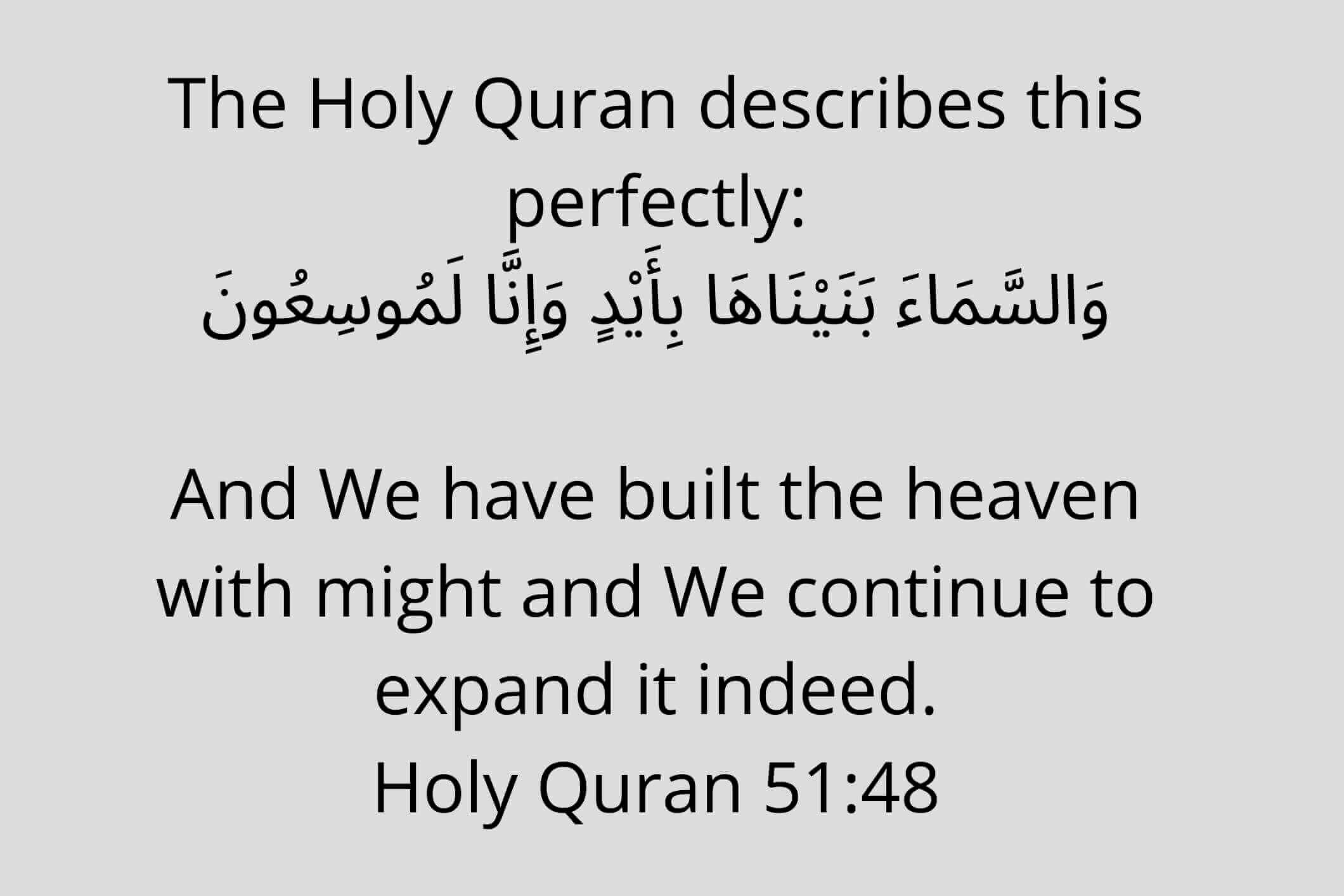 This incredible verse doesn’t merely inform us about the expansion of the universe, either.
The Arabic phrase “la-msi-na” explains that space is expanding forever.
The Prophet Muhammad, peace be upon him, spoke the truth when he made such a proclamation.

The Quran does not simply provide information that has been uncovered by modern science.
Instead, it sheds light on topics that are still up for debate in the scientific community.
Although neither of the following two is certain at the moment, the simple fact that it has been broached is noteworthy.
The end of the universe is one of those things people talk about. Is it going to keep growing indefinitely or eventually contract?
This mysterious topic is clarified in the Holy Quran: 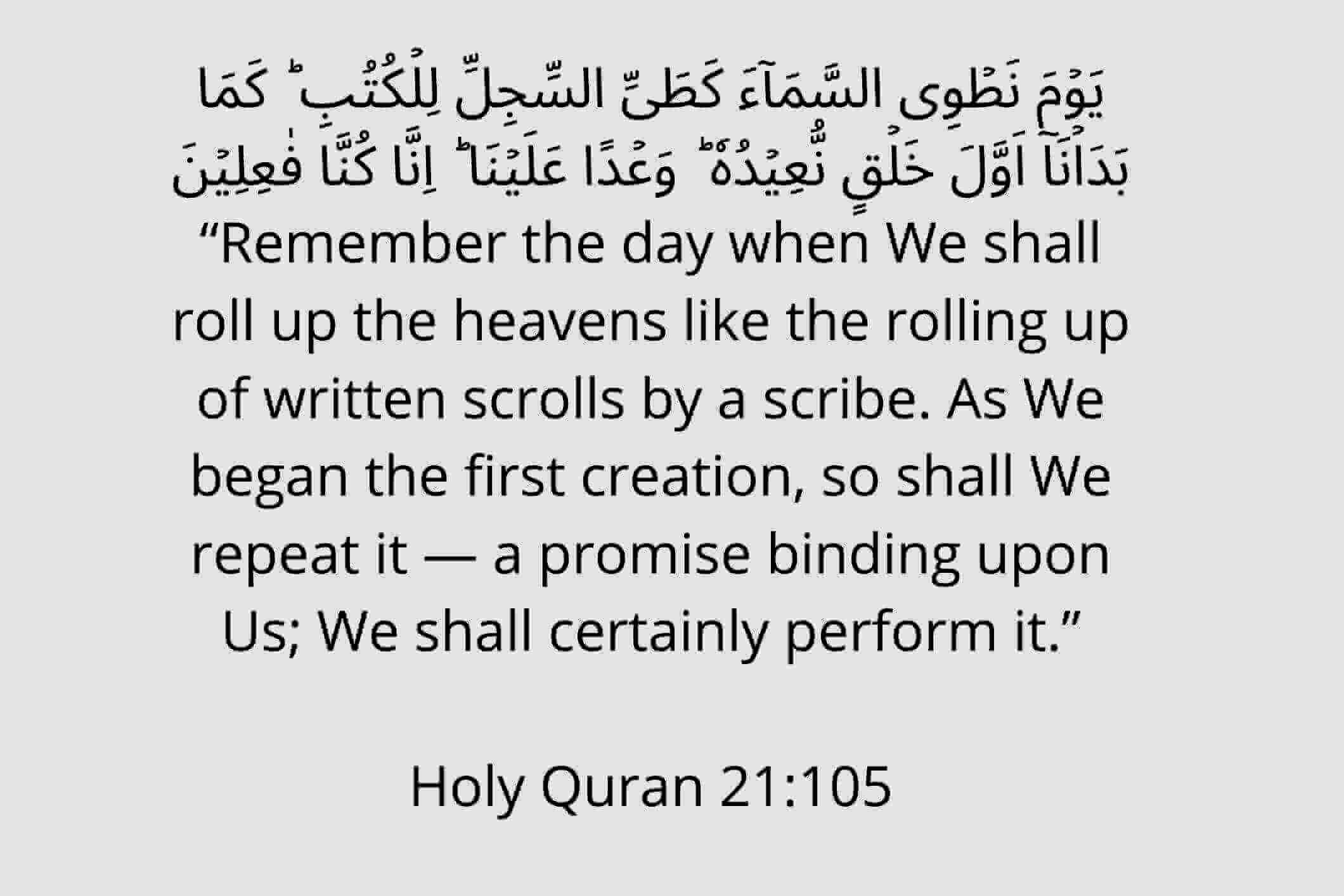 rolls of parchment, allowing it to infiltrate the fabric of space. After that, a brand-new cosmos would be born.