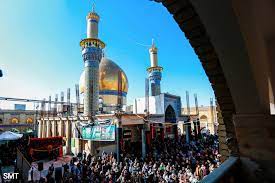 The adored son of Imam Hasan A.S. and Bibi Umm e Farwa,
Hazrat Qasim A.S. also referred to as the “young warrior of Karbala,
” took part in the battle of Karbala. Although his martyrdom is
commemorated globally on the seventh day of the Muslim holy month
of Muharram, people in Pakistan, India, and Iraq have begun to regard this day as his Mehndi.

What is a Mehndi?

Mehndi is a cultural event that is done during a wedding in Pakistan.
So, the question that comes up here is why people think of
the 7th of Muharram as the day of his Mehndi,
since Mehndi has never been a part of Arabic culture or history.
How could it be true that something like this happened
1,400 years ago when nothing like that had ever happened before?

The answer is that it never happened, but a lot of people in
Pakistan thinks wrongly that it did. This is mostly to make
up for the day of sorrow when Imam Hussain a.s. and
his companions ran out of water.
It was a day when all anyone could hear was “Al atsh.”
By focusing on something that falls under happiness,
the main thing that happened on this day was pushed to the background.

Many Shia Muslims celebrate this day as the mehndi of Qasim ibn Hassan a.s.
They are sure that Imam Hussain a.s got Qasim ibn e Hassan
and Fatimah al Kubra bint e Hussain a.s married to show that he
was not there to fight. In ancient times,
this was a way to show that you didn’t want to fight.
Some people say that the Holy Women set up one tent for the bride,
which is not true. Because there was no water, Syeda Zainab a.s.
made henna with her tears.
The khutba e nikah was read by Ghazi Abbas. Mehndi Qasim Ibn Hassan

Even though, in reality, this wasn’t the case! Hazrat Hassan
Musanna was married to Fatimah al Kubra bint e Hussain a.s. Mehndi
and marriage were not things that happened in KARBALA.
This is just a made-up story.
The marriage of a boy who is only 13 years old?
And most importantly in KARBALA? Karbala is only a place for sadness and sacrifices,
not for parties and weddings.

Processions that display Qasim ibn e Hassan’s mehndi are not honoring Karbala.
People who attend such gatherings have their own misconceptions about Qasim ibn Hassan, A.S.

This is not what Karbala teaches us. All nations and future generations should learn
from the lessons of Karbala. The name of the sacrifice is Karbala.
Islam and the protection of faith are known as Karbala.
The lessons of Karbala encourage us to fight for social justice.
Karbala encourages us to stand up for our ideals.
Hussain a.s. sacrificed everything for Islam.
He chose Islam over his family. Mehndi Qasim Ibn Hassan

And we treated Islam in this way. Sadly, this is the direction
we are going! Any incomplete knowledge can make you completely ignorant.
It is comparable to that weak light that can cause you to slip into darkness.

You May Also Like:Surah Al-Mulk Benefits That Every Muslim Should Be Aware