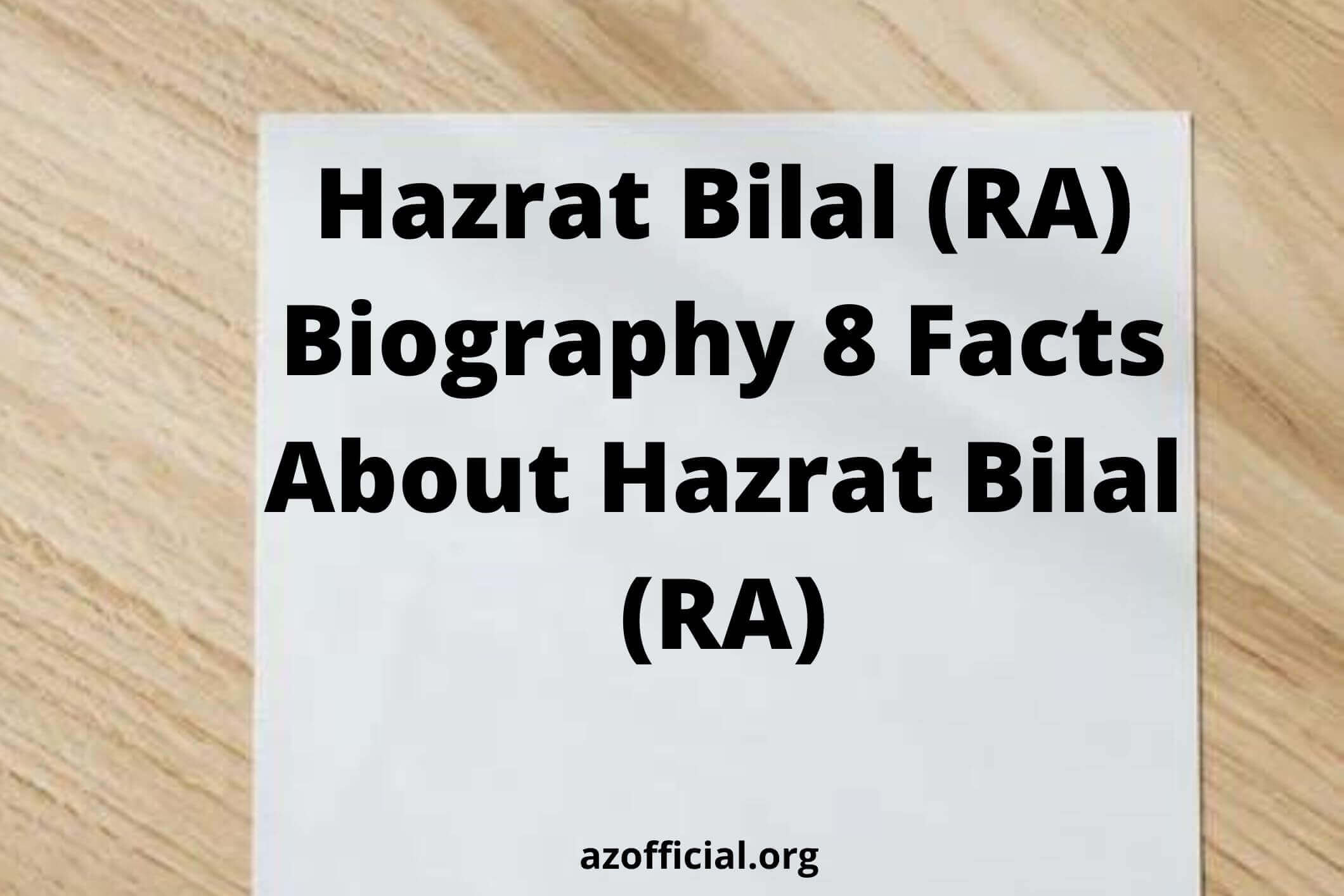 Bilal ibn Rabah al-Habashi was one of the first people to join the new religion of Islam.
He was a loyal Sahabah, or companion, to the Prophet Muhammad.Hazrat Bilal (RA) Biography
He was also the first muezzin, which means “caller to prayer” in the Muslim religion.
Rabah is the first person with African roots who is known to have become a Muslim.

Bilal’s (R.A.) father was Arab and his mother was an Abyssinian (Modern day Ethiopian).
His father’s name was Ribah, and his mother’s was Hamama.
According to different Islamic historians, Bilal (R.A.)
had a dark brown complexion, a tall, slim body, and thick hair.
He had a Muslim brother named Khalid and a sister named Aqra.

Bilal (R.A.) belonged to the Banu Jumah Tribe (one of the Quraish Tribe).
Before Islam was revealed, people of the Jumah tribe were thought to be experts in palmistry.
Bilal’s (R.A.) parents were slaves, and slaves had the lowest status in society because they had to do what their masters said.
Bilal was born a slave, and his master was Umayyah ibn Khalaf, who was the leader of Banu Jumah.

After this marriage, Bilal (R.A.) took on more wives.
Qatadah says that he married a woman from the tribe of Banu Zuhra.
One of his wives was a Yemeni woman named Hinul-Khulania. This is also written down.

On Bilal’s (R.A.) deathbed, his wife wept and said, “What a painful affliction!”
Bilal (R.A.) is thought to have died in Syria between the years 638 and 642 AD.
In his book Tarikh al-Khulafa, Imam Al-Suyuti says,
“He (Bilal) died in Damascus when he was just over sixty.”
Some people think that he died in the city of Madinah. ALLAH is the smartest.

Bilal (RA), an Abyssinian, was a slave in Makkah.
He (RA) was Ummayah bin Khalaf’s slave.

A Stubborn Foe of Islam, Bin Khalif. He simply couldn’t stand to see Islam grow.
While Bilal R.A. Converted to Islam, His Ethiopian Slave, Salafi.
This fueled his rage, and he set out to either eliminate Bilal R.A. or convert him to Islam.

Bilal (RA) was buried in the Arabian Desert, where he was exposed to the scorching heat of the sun.
The scenario was made even worse by piling big hot pebbles on top of him.
The scorching sand on His lower back was burning him, while the
hot rocks on his upper torso were doing the same.
Even if he wanted to, he couldn’t because of all the rocks pressing down on his body.

His faith infuriated his master. Every night, Bin Khalaf would whip Him.
Ummayah bin Khalaf and Abu Jahl took turns torturing him.

Abu Bakr (RA) purchased Hazrat Bilal (RA) from Ummayah, putting a stop to
Hazrat Bilal’s (RA) punishment and allowing him to begin a life of freedom.

In recognition of his perseverance, the All-Mighty Allah bestowed upon him the
the honor of serving as Muazzin of the Prophet’s Mosque (PBUH).
This Is a Great Movement Of His Life.

After the passing of the Prophet (PBUH), Bilal (RA) was unable to carry on living in Madinah as he had before.
He left Madina, but after a few days, he came back because in a dream he had seen the Prophet (PBUH) urging that he pay a visit to Madina.

8- Hassan And Hussain (RA) Asked Billal (RA) to Give Azan:

Hazrat Hussain and Hasan (RA) asked him to recite the Azan for them.When Bilal (RA) returned to Madina.
Then he recites azan and prays his last prayer in Madinah.

Also Like: Abbas Ibn Ali (R.A) Some Facts You Have To Know