Dua For Rain, Stopping Rain, And During Rain 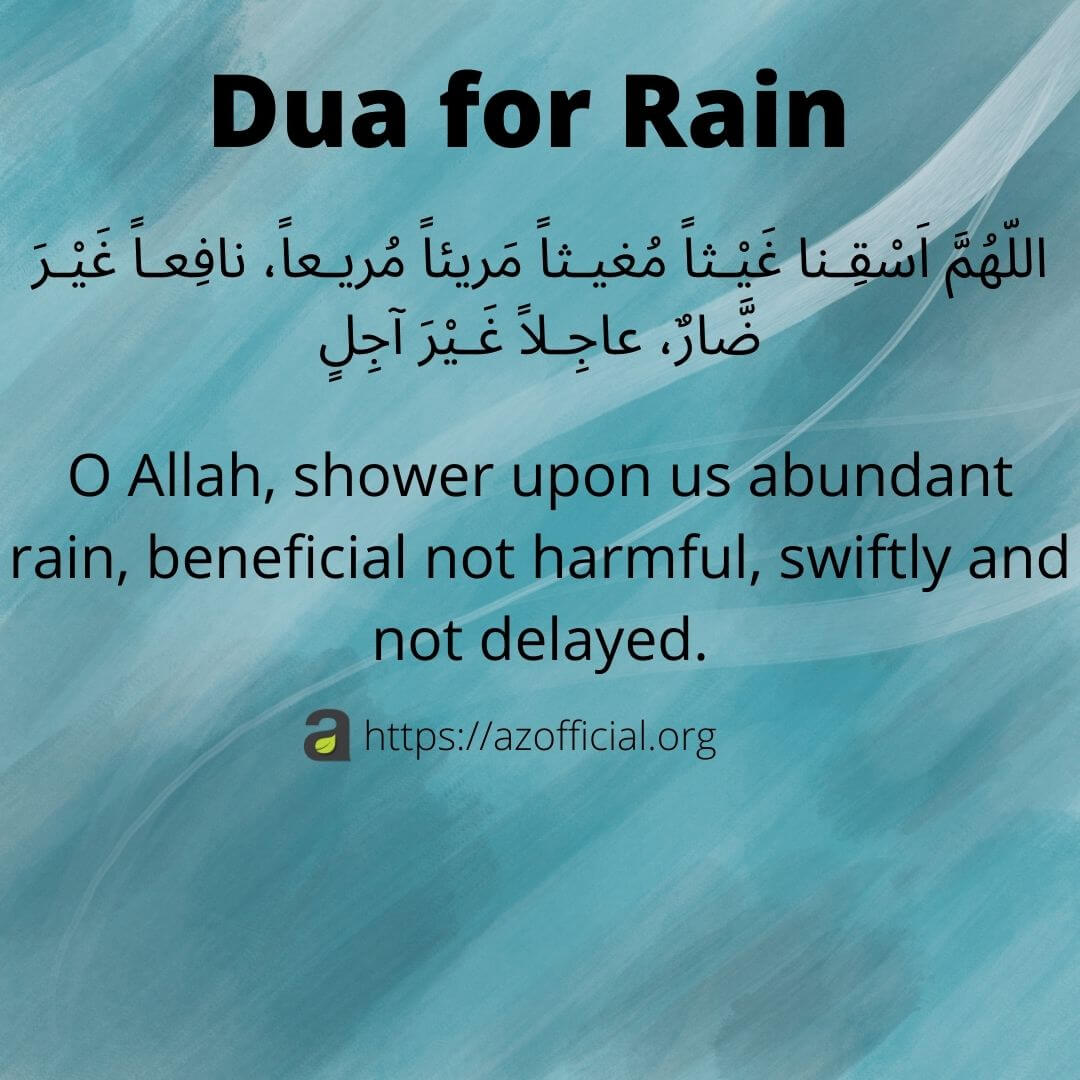 Dua Rain is commonly thought to be Allah’s blessing (SWT).
When it is excessive or excessive, it can also be considered
a punishment from Allah (SWT).
That is why, when it rains, we should pray to Allah for mercy rain.

It is also mustahabb (suggested) to accept Dua at this time.
Acceptance of the petitions takes place at this time.
You are free to ask Allah anything as long as it is not haram.

“Let not one of you refrain from working for his provision,
supplicating to Allah to provide while he knows the sky does not rain gold and
silver,” Umar, may Allah be pleased with him, said, according to Al-Ghazali.

These are the duas for rain, stopping excessive rain, and reciting during a thunderstorm.
Recite it when the rain begins to fall.
Some countries are experiencing extreme rain, while others are experiencing
moderate rain or none at all.
These duas are an excellent way to seek Allah’s favor to obtain rain,
halt it, or thank Him for it.

We at AZ Official Religious Network compiled a list of all the appropriate duas
that can be recited during the rain.
It is a thorough guide that will help you select the best dua to recite
from praying for rain to stopping it.

“O Allah!” said Allah’s Messenger (SAWS) whenever he observed the rain
according to Aisha. Allow it to rain heavily and abundantly.”
Reference : Sahih al-Bukhari 1032 In-book reference : Book 15, Hadith 27
This dua is usually appropriate when your country or city is experiencing a severe
heatwave or hasn’t received any rain in a long time.
This dua is necessary when you are requesting rain.
Hadith: The people wept as they approached the Prophet (SAWS) (due to drought).
He prayed to Allah, saying, “O Allah!” Give us rain that will refresh us, rain that is plentiful
fertile, and beneficial, not harmful, and provide it now, without delay.
The sky turned gloomy after that, he (the storyteller) added.
Based on the hadith of Prophet Muhammad, may peace and blessings are upon him
these are the three Duas you can recite when it rains. (Grade: Sahih (Al-Albani): Reference: Sunan Abi Dawud 1169 In-book reference: Book 3, Hadith 9 English translation: Book 3, Hadith 1165) 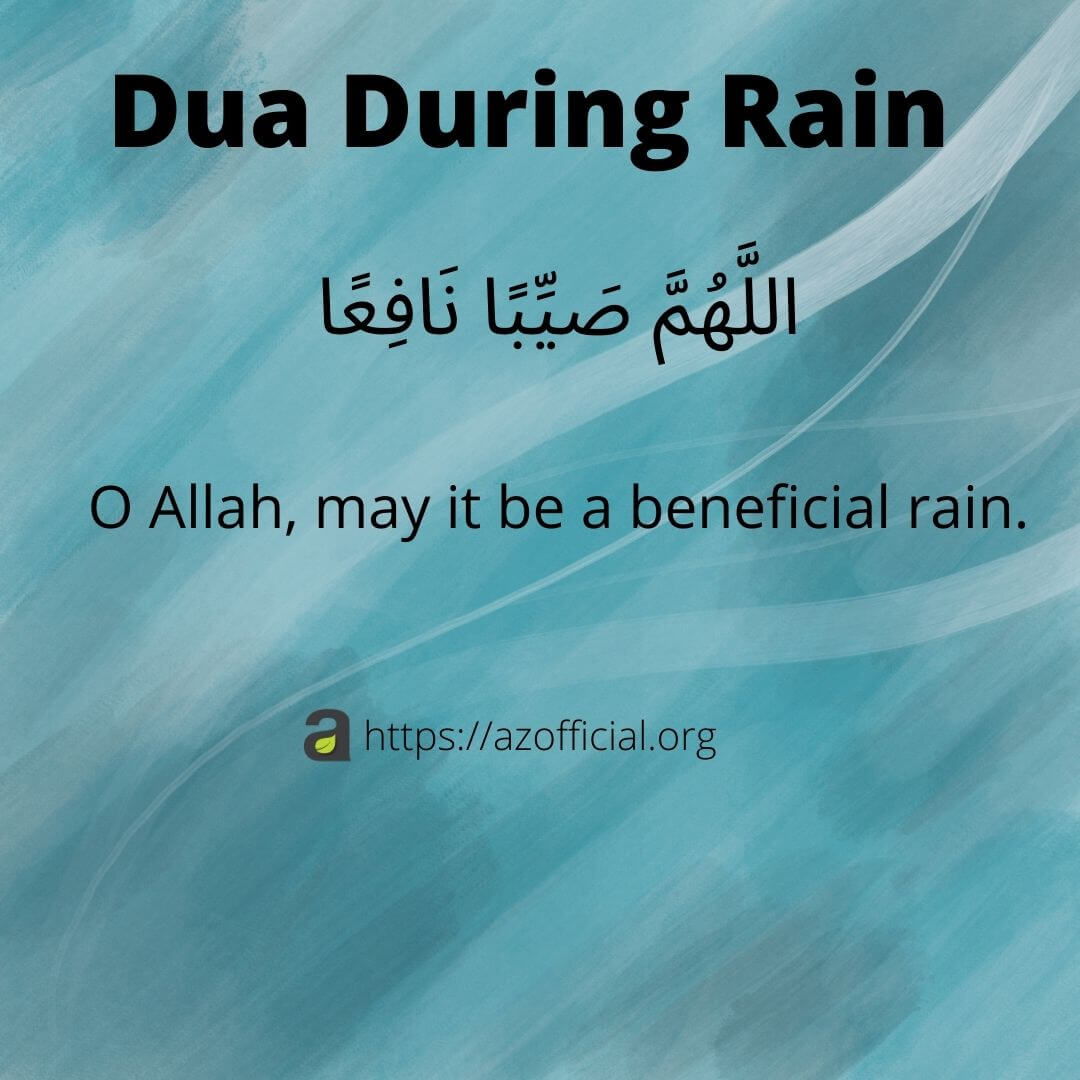 Typically, this Dua is appropriate when your country or
city is experiencing a severe heatwave or has not received any rain in a long time.
This dua is required for asking for rain. 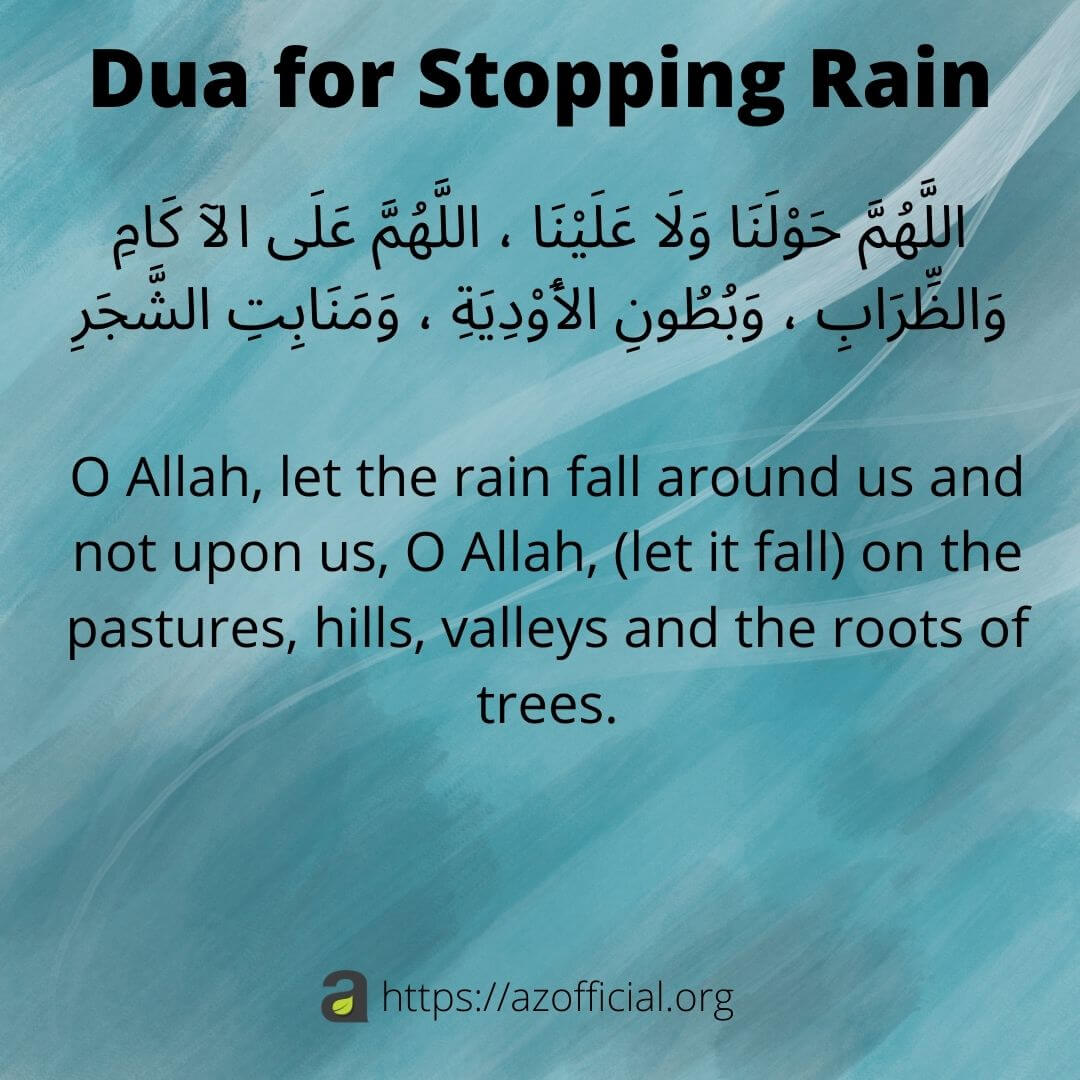 Excessive rain in some locations causes Flooding and other
disasters that can claim many lives. To avoid this,
we might beg Allah’s forgiveness by chanting this
specific dua during the rain and storms.
We understand your need to know how many times you should repeat it.
The natural response is that you can recite it as many times as you like;
there is no limit; however, if you are short on time, one time would be enough.

During Jumu’ah prayer, a man approached the Prophet (PBUH) and Livestock
had been destroyed and the highways have been shut off.
As a result, Allah’s Messenger prayed to Allah for rain, and
it rained from that Friday to the following Friday. Duas for Rain
“Houses have collapsed, roads have been blocked off, and livestock has been destroyed
stated the same source. Please ask Allah to keep the rain away.”
“O, Allah! (Let it rain) on the plateaus, on the hills, in the valleys, and
over the regions where trees grow,” said Allah’s Messenger (saws).
As clothing was removed the clouds in Medina dissipated.
In-book reference: Book 15, Hadith 11 (Sahih al-Bukhari 1016).

Rain is a wonderful gift that Allah s.w.t bestows on the planet.
It is referenced in the Quran in various verses, including the formation process
and how it aids life on Earth.
In Surah Ar-Rum and Surah An-Nur, Allah s.w.t emphasizes and
describes this process, saying:

Allah sends the winds, and they agitate the clouds and spread them in the sky
however He pleases, and He breaks them apart so that rain can fall from within them.
And they quickly exult when He sends it to fall on whom He wills of His servants.

Do you not realize that Allah is the one who controls the weather?
The rain appears from within it when He gathers them and
molds them into a heap And He sends hail-filled mountains (of clouds) down from the sky, striking whom He wills and averting it from whom He wills.
Its lightning is so bright that it almost blinds you. Dua for Rain

According to Ibn Umar

Peace and blessings are upon him, observed,
“Never do people withdraw alms from their money except that a portion from the sky is withheld, and it would never rain if it weren’t for the animals.” Dua for Rain

When it rains, the Prophet s.a.w. advised us to pray. He mentions in a hadith:

There are two duas (prayer) that are accepted:
When the call to Prayer Azan is recited, and when it rains, the Dua is said.

The source is Mu’jam Al-Kabeer 13454, which is graded as Sahih (genuine).
Allowing the rain to fall on your skin is likewise mustahabb (recommended).

As we stood with Allah’s Messenger, it began to rain (saws).
The Prophet Muhammad (peace be upon him) removed his cloth
(from a part of his body) and waited for the rain to fall on it.
“Why did you do this, Messenger of Allah?” we asked.
He said that it was because the rain had just come from the Exalted Lord.
Sahih Muslim 898 In-book reference: Book 9, Hadith 14
Another hadith advises Muslims to make dua as the rain begins to fall.
“Seek an answer to supplication when two armies meet when the prayer is established,
and when the rain falls,” the Prophet, peace, and blessings be upon him,
remarked according to Makhul.
“I have learned from more than one master to seek an answer to supplication
during the time of rainfall and to establish the prayer,” Ash-Shafi’ee added.
Source: Al-Umm Ash-Shafi’ee 419 Al-Albani graded it Hasan (fair).

If you just remember one thing from this post,
it would be to never miss a chance to make dua while it rains.
You are free to ask Allah whatever you want. Dua for Shifa – For Health Improvement, Forgiveness from Sins Just don’t pass up the opportunity.