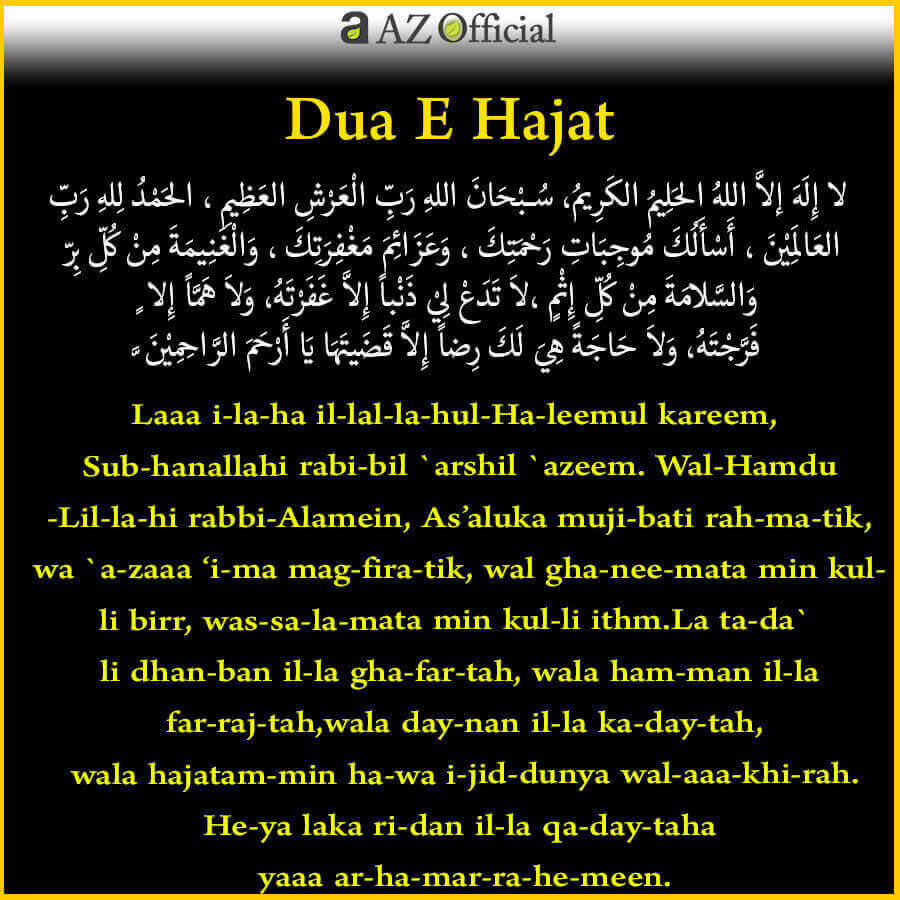 Abdullah ibn Abi Awfa says about the Salatul-Hajat that the Messenger of Allah said,
Anyone who wishes to make a dua with Allah or a specific individual should do two rakats of ritual washing before doing so.
let them do ritual washings and then pray for two rakats.”
Then they should praise Allah and send blessings (Durood) to the
Prophet (peace and blessings be upon him).”

Glory to Allah, the Master of the Great Throne. Allah, the Lord of the worlds,
deserves all the praise. I ask you (O Allah) for everything that will bring you mercy
and forgiveness, make me rich in all good things, and set me free from all sin.

Do not leave a vice of mine (O Allah) unless you forgive it,
nor a worry unless you make a way for it, nor a need that makes you
happy unless you meet it, O Most Merciful One.

Abu Dawood said that this dua means, “When something got serious,
the Prophet (PBUH) went to prayer.”

It means that anyone can ask God for help at any time because God is the
most merciful and kind.

One of the most important prayers is called Salatul Haajat. It is a voluntary call to God.
It’s celebrated so that each person can finish their own Haajah (need).
It is just one way to ask the Almighty for what you deserve.

“Allah will give him what he prays for sooner or later if he does wudu
and does it right and then prays two rak’ats.” (Ahmad)

First of all, if a person reads, after every prayer for the rest of his life,
especially Friday prayers, Allah will protect him from his enemies and give him the best benefits.
Everyone has their way of talking to him and telling him what they want.

Always remember that his blessing is not to be taken lightly.
I’d like to point out that we must always say “Alhamdulillah”
to Allah, the Most Powerful, no matter what.

You’ve probably heard the phrase “As you sow, so shall you reap,”
which means that you have to do good things over and over again to get good results.
If you want to hurt someone, bad things will also happen to you.

For these prayers, called namaz, there is a certain way they should be done.
Here is a quick guide.