Why Is Muharram Called Allah’s Month? 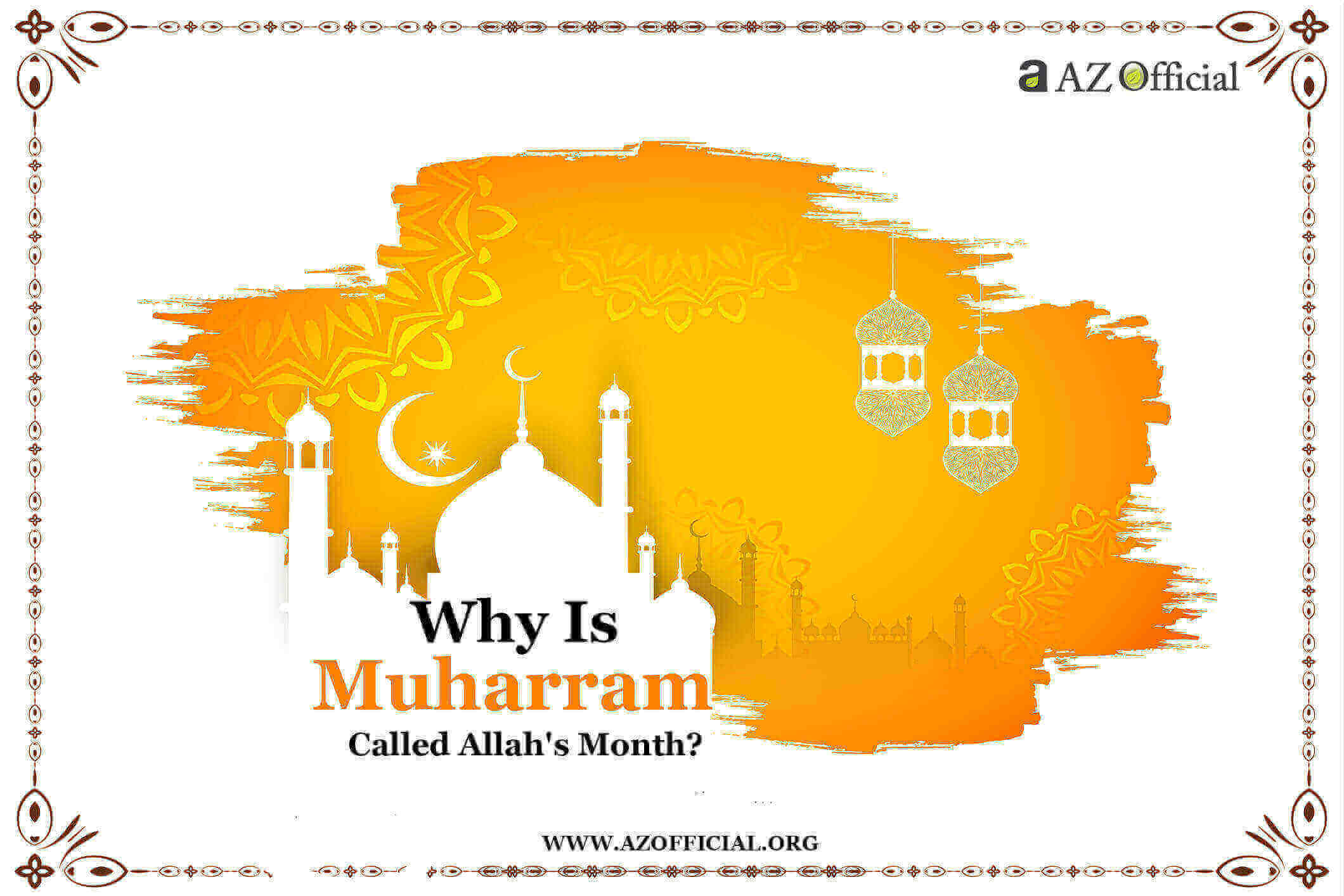 The Islamic calendar has 12 months however,
we tend to know more about some than others.
Everyone is aware of the importance of Ramadan
fasting and the Dhul Hijjah sacrifice. Muharram,
on the other hand, appears to be less well-known than Ramadan.
Be stated in the Hadith,
no other month is referred to as the month of Allah (SWT).

Muslims hold a lot of religious and historical
value in the month of Muharram.
Not only did Allah (SWT) make it a holy month,
but it is also the first month of the Islamic calendar.
It marks when the Muslims moved to
Medina set up the first Islamic state in 622CE.

“A man asked the Prophet (PBUH),
‘Which fasting is better after Ramadan?’ He said,
“The Islamic month is called Muharram.” (Ibn Majah)

Allah’s Messenger (PBUH) said,
“After Ramadan,
Allah’s month of Al-Muharram is the best time to fast.
And the night prayer is the best Salat after the required one” (Tirmidhi)

Muharram is the first month of the Islamic calendar,
so it marks the beginning of the New Year for Muslims.
Muharram also has a bigger meaning.
The holy Qur’an says that Muharram is one of the four holy months.

“There are twelve [lunar] months in Allah’s book,
starting from the day He made the heavens and the earth.
Four of these months are holy. That is the right religion,
so don’t do anything wrong during them.
And fight the nonbelievers as a group,
just as they fight you as a group.
And know that Allah is with the good people who respect Him. [Qur’an, 9:36]
During this blessed month,
the good things we do bring us more rewards,
and the bad things we do bring us more punishment.

1st Muharram is the first day of the Islamic new year.
9th Muharram: An extra fast is suggested for Ashura Day.
The day of Ashura is the 10th of Muharram.
If you didn’t fast on the 9th,
you can do the extra recommended fast on the 11th.Muharram

There Are Four Holy Months.

In the Noble Qur’an, Allah said this about the sacred months:
“In fact, the number of months that Allah has decreed
is twelve [lunar] months. This was written in
the [Preserved Heavenly] Book of Allah on the day
He made the heavens and the earth.
Only four of them are holy.
That’s the right religion,
so don’t do anything wrong in it.” (9:36)

The names of these four months are
Dhul Qa’dah, Dhul ‘Ijjah, Muharram, and Rajab.

The Messenger of Allah (PBUH) said,
“There are twelve months in a year,
and four of them are holy:
the three consecutive months of Dhul Qadah
Dhul Elijah, Muharram, and Rajab of Muar
(named after the tribe of Muar because they used to respect this month),
which comes between Jump (al-akhirah) and Shaban.”
(Bukhārī 4406, Muslim 1679)

Even though these four months are named,
that doesn’t mean that other months aren’t also holy.
For example, everyone agrees that Ramadan
is the holiest month of the year.
But these four months were called “sacred”
because even the pagan people of Makkah
respected them as holy,
just like their ancestor Ibrahim (peace be upon him)
had done. Even though they fought with
each other all the time, they decided
it was against the law to fight during these
months. Since the beginning of time,
when Allah made the universe,
these four months have been holy.

The Number Of Events During The Sacred Months

Ibn Abbas (may Allah be pleased with him) said,
“The phrase “so don’t do wrong in them”
refers to all the months,
but these four were singled out and made holy,
so sins in these months are worse and
good deeds bring a greater reward.”

Qatadah said the phrase “so don’t do wrong
during them”: “Doing wrong during the
sacred months is worse and causes more
sin than doing wrong during other months.
Doing something wrong is always a big deal,
but Allah makes His commands even more important if He wants to.

He also said,
“Allah chose the best of His creations: from the angels,
He chose Messengers; from
people He chose Messengers; from speech,
He chose dhikr (remembering Him);
from the places on earth,
He chose the Masjid; from the months, He chose
Ramadan and the sacred months… So,
respect what Allah has respected because
people with understanding and wisdom
respect what Allah has respected. (Ibn Kathīr)

The first month of the Islamic calendar is Muharram
(also known as the Lunar or Hijri calendar).
This Islamic calendar for 2022 is based on 12 lunar months.
The first day of a new month is set by when a new moon is seen.

Why Does Muharram Get a Holiday?

Make a Good Start To The New Year

Ibn Rajab said, “(Two of the) sacred months mark
the end and the beginning of the Islamic Year.
So, whoever fasts in Dhul Elijah (except on the forbidden days)
and in Muharram has ended and begun the
year in worship.” So, it is hoped that the
the whole year will be recorded as worship,
since anyone who starts something
with worship and ends it with worship
will be considered to have been in
a state of worship between these two times.

Ashura is a special day that happens in Muharram.
On this day, which is the 10th day of Muharram,
the Prophet Muhammad told Muslims to fast (SAW).
I’ve never seen the Prophet of Allah (peace and blessings of Allah be upon him)
so eager to fast on any day and give it more
importance than this day, Ashura, and this month,
Ramadan.” (Bukhari)

The Prophet (SAW) said that fasting on Ashura
makes up for the small sins of the past year:

On Ashura, Why Did The Prophet Fast?

On the 10th of Muharram, or ‘Ashura, Allah saved the Prophet
Moses (PBUH) and the people of Israel from Pharoah.

“When the Prophet (peace be upon him) went to Madinah,
he saw Jews fasting on the day of ‘Ashura.
“What is this?” he asked. They said, “This is a good day.
This is the day that Allah saved the Israelites
from their enemy, and this is the day that Moses fasted.”
He said, “You are farther away from Musa than we are.”
So, on this day, he fasted and told everyone else to do the same.” (Bukhari)

On that day, the Prophet Musa (PBUH) fasted to show
Allah his thanks for saving the Believers.

Islam scholars say that you should fast on both the 9th
of Muharram and the 10th of Muharram (Ashura). Because of the Hadith:

The Prophet (PBUH) wanted to be different from
the People of the Book by fasting on the 9th.

Some of the scholars also thought it was a good idea to
fast on the 11th of Muharram.
This could be done if someone misses the 9th
or to make sure they don’t miss the 10th of Muharram.
Because of this, it is good to fast:

You can fast just on the day of Ashura,
on the 9th and 10th, or on the 10th and 11th.
Some religious scholars even fasted on the ninth,
tenth, and eleventh of Muharram.

Any of these options is a good choice

We can take advantage of the benefits of the holy
the month of Muharram in simple ways:

Read the Qur’an. If you can’t fast, you can still feel the
blessings of Muharram by reading the Qur’an or doing Dhikr.
Remember that any time you get together for Allah SWT’s sake,
barakah will be there, and angels will join you.

Give Sadaqah on a regular basis. Muharram is the start
of the Islamic New Year, so it’s a great time to set goals
and start good habits, like giving charity on a regular basis,
so that you can be blessed all year long.

You can make the most of this blessed
month by doing the following:

Especially when you are fasting, do du’a.
The Messenger of Allah (PBUH) said,
“There are three prayers that will never be turned down:
a father’s prayer for his child, a fasting person’s prayer,
and a traveler’s prayer.” (Tirmidhī 1905)
You can get our free book “I Am Near” to learn how to
pray and to read the prayers from the Qur’an and Sunnah.

Read and think about the Qur’an.
Make goals that are reasonable
and fit your schedule, but try to read the Qur’an every day.
This could be a whole chapter or just a couple of pages.
In addition to reading the Qur’an,
take some time to think about what it says.
Do dhikr abundantly. Make a plan to learn the Sunnah adhkar,
especially the morning and evening adhkar,
the adhkar after salah and before sleeping,
and the adhkar for general acts. ions.
You can get a copy of “Daily Adh” for free. Kr.
Please give in ch The Prophet of Allah (PBUH) said,
“Give charity, but don’t count it, or Allah will count it again.”
Do not save it up, or Allah will take it away from you. m you.”
(Musli m 1029)

May Allah make this year the best year and each day
the best day for each of us and for the Ummah as a whole. Āmīn.